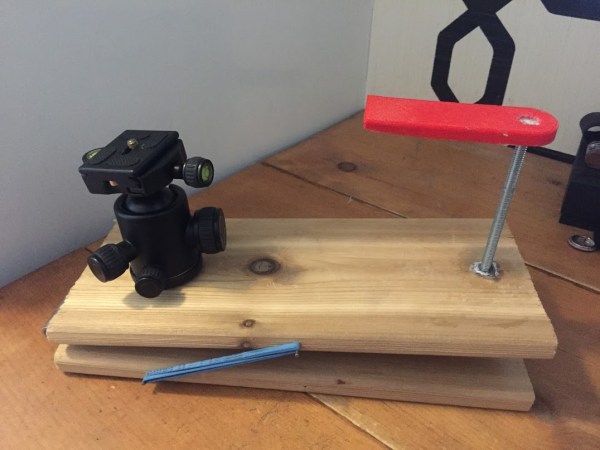 Think you need some fancy equipment to get stunning shots of the night sky? Surely those long-exposure shots that show the Milky Way in all its glory take expensive telescopes with complicated motor-driven equatorial mounts, right? Guess again – you can slap together this simple barn door tracker for a DSLR for a couple of bucks and by wowing people with your astrophotography prowess tonight.

Those stunning, deeply saturated shots of our galaxy require a way to cancel out the Earth’s movement, lest star trails ruin your long exposure shots. Enter the barn door tracker, a simple device to let you counter the Earth’s rotation. [benrules2]’s version of the tool is ridiculously simple – two boards connected by a hinge. A short length of threaded rod with a large handle passes through a captive nut in the upper board.

A little trig allows you to calculate how much and how often to turn the handle (by hand!) to counter the planet’s 0.25°/minute diurnal rotation. Surprisingly, the long exposure times seem to even out any jostling introduced by handling the rig, but we’d still imagine a light touch and a sturdy tripod would be best. Those of you with less patience might automate this procedure.

It seems a lot to ask of a rig that you could probably throw together in an hour from scrap, but you can’t argue with [benrules2]’s results. His isn’t the only barn door tracker we’ve covered, but it looks like the simplest by far and would be a great project to build with kids.