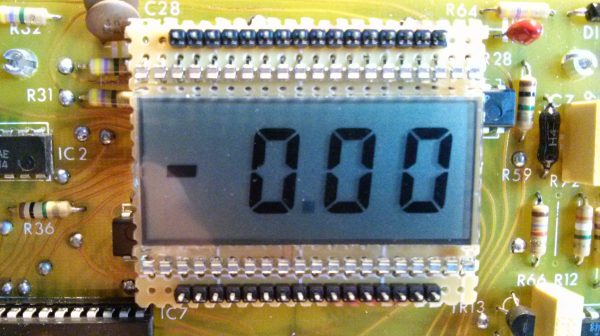 Hackers are often of the sentimental type, falling in love with the look and feel of quality old hardware. Of course, sometimes that older hardware needs a little TLC to keep it running in the modern world. [Lex] had a beautiful vintage multimeter that sadly had a broken screen, and set about a nifty repair to restore it to working condition.

The HSN Avometer DA116 is a handsome thing, controlled with two dials and featuring a clean two-tone aesthetic. Even the font on the PCB’s silkscreen is gloriously pretty (can anyone ID that?). However, the original LCD was non-functional. A direct replacement part was sadly unavailable. Instead, to rectify this, [Lex] first hunted down another segmented LCD screen that had the same segment layout.

However, the new screen had a completely different pinout to the original part. Thus, after taking some notes and figuring out what all the pins did, [Lex] whipped up an adapter board to carry the new screen. With some protoboard, some pin headers, and a bunch of point-to-point wiring, the new screen worked just fine, and [Lex] had a functioning vintage meter once again!

The story actually came to us on Twitter, where we invited discussion about the best bodge wiring jobs out there. Feel free to contribute your own stories to the conversation! If you’re in the market for more LCD hacking, be sure to check out the excellent talk [Joey Castillo] gave at the 2021 Remoticon.