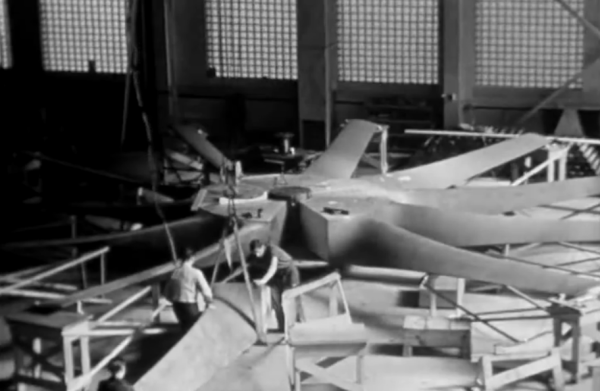 During World War I, the United States felt they were lagging behind Europe in terms of airplane technology. Not to be outdone, Congress created the National Advisory Committee for Aeronautics [NACA]. They needed to have some very large propellers built for wind tunnel testing. Well, they had no bids, so they set up shop and trained men to build the propellers themselves in a fantastic display of coordination and teamwork. This week’s film is a silent journey into [NACA]’s all-human assembly line process for creating these propellers.

Each blade starts with edge-grained Sitka spruce boards that are carefully planed to some top-secret exact thickness. Several boards are glued together on their long edges and dried to about 7% moisture content in the span of five or so days. Once dry, the propeller contours are penciled on from a template and cut out with a band saw.