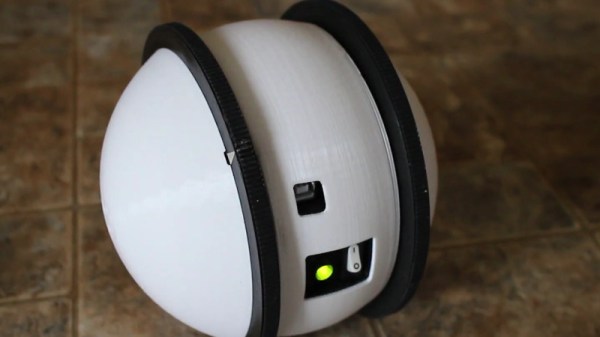 It’s now about six years since Star Wars: The Force Awakens first showed us the little spherical robot BB-8, but it’s fair to say that along the way we’ve not lost our collective fascination for rolling-ball robots. There have been plenty of attempts to make a fully-rolling device, but perhaps [Derek Lieber] has a better take on it by turning a spherical robot into a two-wheeled roller by the addition of a pair of tyres. Inspired by a Samsung prototype that never made it to market, it works by the wheels working against the machine’s low centre of gravity, and using a tilt sensor to control speed. 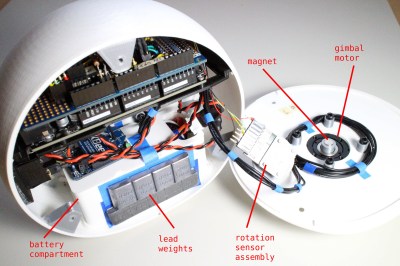 The ball chassis is a 3D printed shell, into which after much experimentation with motors, the final version put a pair of gimbal motors with a set of magnetic position sensors. Inside is an Arduino Mega and a custom motor driver board sporting an LM6234, with an XBee radio for remote control.  Meanwhile the power comes from a set of three LiPo cells, and there is some extra lead ballast in the bottom to keep the whole thing balanced.

We’ve seen more conventional takes on a spherical robot in the past, but we’re particularly keen on this one, and excited to see where the future takes it.