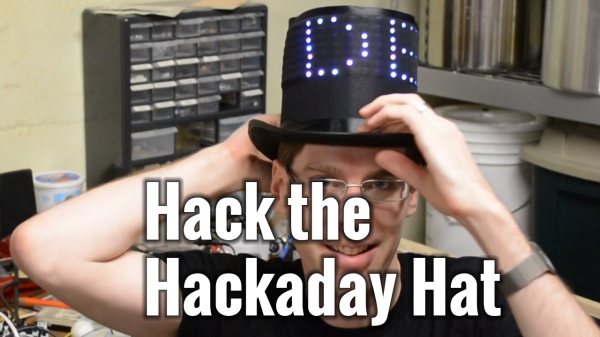 We don’t want to call it a challenge because we fear the regulars at DEFCON can turn our piece of hardware into a smoking pile of slag, but we are planning to bring a bit of fun along with us. I’ll be wearing this classy headgear and I invite you to hack your way into the WiFi enabled Hackaday Hat.

I’ll be wearing the hat-of-many-scrolling-colors around all weekend for DEFCON 22, August 7-10th in Las Vegas. You may also find [Brian Benchoff] sporting the accessory at times. Either way, come up and say hello. We want to see any hardware you have to show us, and we’ll shower you with a bit of swag.

Don’t let it end there. Whip out your favorite pen-testing distro and hack into the hat’s access point. From there the router will serve up more information on how to hack into one of the shell accounts. Own an account and you can leave your alias for the scoreboard as well as push your own custom message to the hat’s 32×7 RGB LED marquee.

You can learn a bit more about the hat’s hardware on this project page. But as usual I’ve built this with a tight deadline and am still trying to populate all the details of the project. While the hacking zeitgeist is focused nearly entirely on all those new ARM dev boards that include the Raspberry Pi, some people out there are still doing it old school by modifying existing electronics to suit their needs. [Peter] picked up one of those very inexpensive TP-Link 703n wireless routers we’ve seen before and modified it into a standalone web radio, complete with volume and tuner knobs.

The TP-Link 703n is a wireless router smaller than a credit card available from the usual Chinese resellers for about $20. Able to run OpenWRT, this very inexpensive piece of hardware can be transformed into a device comparable to the Raspberry Pi; a complete Linux system with a few GPIO pins.

[Peter] took his 703n router and added an ATtiny85 connected to two pots and the internal UART. This, along with a script to read the values from the pots, tells the router what station to tune into and what volume to play it. The audio is handled by a USB soundcard with an internal speaker, making [Peter]’s build one of the smallest purpose-built Internet radios we’ve seen.

You can see [Peter]’s radio in action after the break.