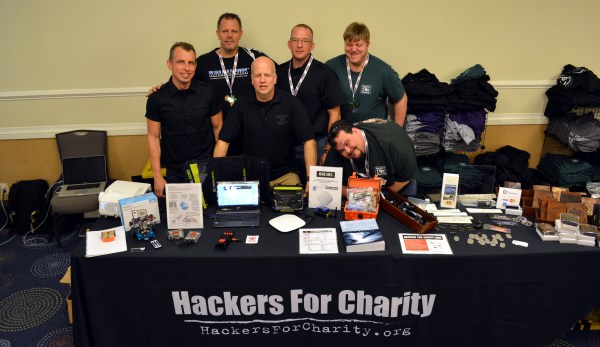 To one side of the “Chill Room” at this year’s Shmoocon were a few tables for Hackers for Charity. This is an initiative to make skills-training available for people in Uganda. The organization is completely supported by the hacker community.

Hackers for Charity was founded by Johnny Long about seven years ago. He had been working as a penetration tester but you perhaps know him better from his many books on hacking. Having seen the lack of opportunity in some parts of the world, Johnny started Hackers for Charity as a way to get used electronics and office equipment into the hands of people who needed it most. This led to the foundation of a school in Uganda that teaches technology skills. This can be life-changing for the students who go on to further schooling, or often find clerical or law enforcement positions. Through the charity’s donations the training center is able to make tuition free for about 75% of the student body.

The education is more than just learning to use a word processor. The group has adopted a wide range of equipment and digital resources to make this an education you’d want for your own children. Think Chromebooks, Raspberry Pi, robotics, and fabrication. One really interesting aspect is the use of RACHEL, which is an effort to distribute free off-line educational content. This is a searchable repository of information that doesn’t require an Internet connection. Johnny told me that it doesn’t stop at the schoolroom door; they have the system on WiFi so that anyone in the village can connect and use the resources whether they’re students or not.

Shmoocon does something interesting with their T-shirt sales. They’re not actually selling shirts at all. They’re soliciting $15 donations. You donate, and you get a shirt and a chit — drop you chit in a box to decide where your $15 should go. This year, Hackers for Charity, the EFF, and World Bicycle Relief were the charities to choose from. If you want to help out this 501c3 organization, consider clicking the donate button you’ll find on the sidebar and footer of their webpage.