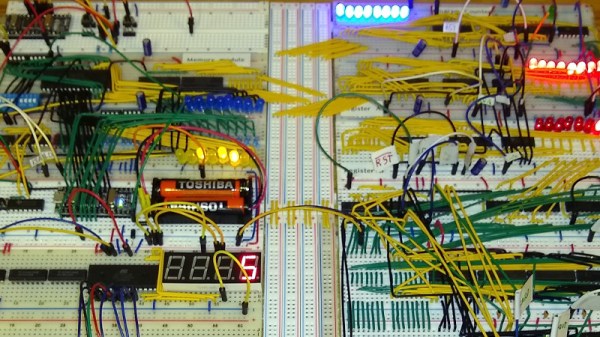 Making a CPU or indeed a whole computer system from scratch using discrete logic chips is by no means an unusual project, but it’s still one that requires quite a lot of technical ability and understanding of how computers work. Similarly, writing a UNIX-like operating system from scratch is something that’s been done more than once, but which definitely puts the author in an exclusive breed.  Creating a CPU and computer system from discrete logic and then writing a UNIX-like OS for it? That’s definitely something new, but here’s [RobotMan2412] with both CPU and operating system to prove it!

The GR8CPU as he calls it is an 8-bit design with a 16-bit address space, making it equivalent to a typical mid-to-late 1970s 8-bit chip. He’s on revision 3 of the processor, and even makes the bold suggestion that it might be the most complex breadboard CPU ever made. That’s impressive enough, but to add a UNIX-like operating system makes it special.

While he has a real GR8CPU, it appears he’s also written an emulator with access to a disk filesystem, and it’s on this that he shows us the OS running. Don’t expect an all-singing all-dancing desktop OS here, instead it’s a kernel and very basic command line that’s just about able to run a Hello World. The kernel is hand-coded in assembler and is about 5 kB in size.

We look forward to seeing more of this project, and hope maybe he’ll one day soon publish the source. As a reminder that this is a perfectly capable platform for the job, here’s the original UNIX running on a vintage DEC PDP7.