We took a look at the ZeroPhone early this year, and while there have been significant advances in this project, the philosophy is still pretty much the same. This is a mobile phone with a numeric keypad and a 128 x 64 pixel OLED display — basically the same user interface as a Nokia brick. The brain of the phone is a Raspberry Pi Zero wrapped in a PCB sandwich, with options for WiFi, Bluetooth, HDMI and audio outputs, a USB port, battery charging, and a ton of GPIOs that include ISM band radios, infrared receivers and transmitters, more flash storage, and anything else you can imagine. Basically, we’re looking at one of those modular, reconfigurable smartphone ideas, using a Raspberry Pi as the brains. Tech journos should be creaming themselves over this. We’re looking forward to [Arsenijs]’ cover story in Wired.

As with any Open Source / DIY cell phone, the big question surrounding the ZeroPhone is the cellular radio. 2G radios are cheap and plentiful, but the infrastructure is either coming down shortly, or already is down. A 3G radio is a must for a minimum viable product, and [Arsenijs] says there are provisions for replacing the 2G radio with a 3G module. Of course, 3G modules aren’t as capital-‘O’-Open as their technological predecessors, but that’s a discussion for another time.

Already the ZeroPhone is a huge success. There’s an actual team working on this project, the ZeroPhone subreddit is bigger than the Hackaday subreddit, there are newsletters, a wiki, and there will be a crowdfunding campaign ‘shortly’. This is one to look out for, and a very worthy project in the running for the 2017 Hackaday Prize. 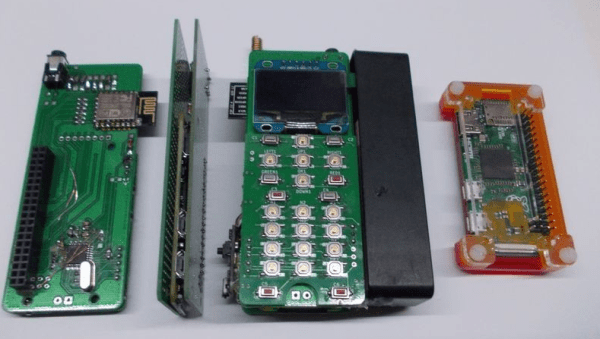 There are several open source phones out there these days, but all of them have a downside. Hard to obtain parts, hard to solder, or difficult programming systems abound. [Arsenijs] is looking to change all that with ZeroPhone. ZeroPhone is based upon the popular Raspberry Pi Zero. The $5 price tag of the CPU module means that you can build this entire phone for around $50 USD.

The radio module in the ZeroPhone is the well known SIM800L 2G module. 2G is going away or gone in many places, so [Arsenijs] is already researching more modern devices. An ESP8266 serves as the WiFi module with an OLED screen and code in python round out this phone. Sure, it’s not a fancy graphical touchscreen, but a full desktop is just a matter of connecting a display, mouse, and keyboard.

For the security conscious, the ZeroPhone provides a unique level of control. Since this is a Raspberry Pi running Linux, you choose which modules are included in the kernel, and which software is loaded in the filesystem. And with news that we may soon have a blobless Pi, the firmware hiding in the radio modules are the only black boxes still remaining.

If a Raspberry Pi is a bit too much for you to bite off, check out this Arduino based phone. Don’t want to do any soldering? Check out what you can do with a cheap Android phone and a bit of hacking.