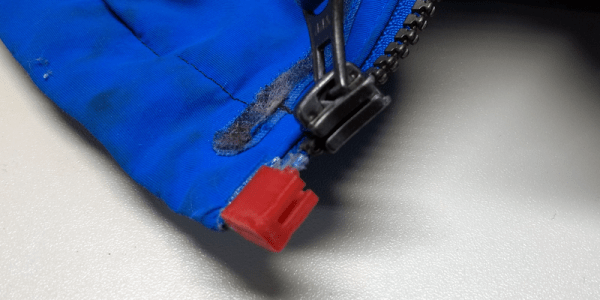 Picture it: winter, a few years ago. [Ted Yapo]’s son is sent to the front lines of a snowball war. He rises to the task, pelting kid after kid with ease and taking down the Johnson twins with a two-fisted trebuchet maneuver. As he hunkers down to form the last snowball needed to claim victory, the unthinkable happens: the zipper box on his coat breaks and falls silently into the snow. Unaware, he leaps to his feet to take his final shot and the whole zipper unfurls, exposing him to both the cold and the enemy. They won the war, but at what cost?

[Ted] figured the coat was done for. He thought about replacing the zipper entirely, but that was going to be a lot of work. He cast a forlorn look around his workshop and his gaze fell upon the 3D printer in the corner. I can rebuild it! He thought. I have the technology! He was off to design a new box in OpenSCAD and had sturdy ABS replacement zipper box in no time. He installed it with dab of Duco cement, and the rest is history. That coat saw two more winters and countless snowball wars before [Private Yapo] presumably grew out of the thing.

Zippers are the unsung heroes of clothing. If you don’t know much about zippers, sink your teeth into [Dan Maloney]’s recent ode to the quickest fastener we’ve got.