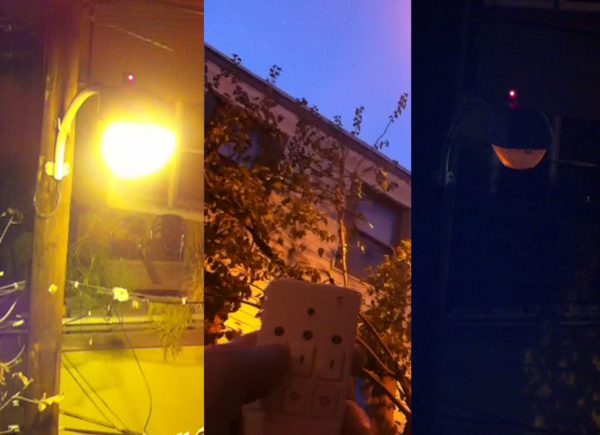 $20, some spare parts and a bit of mischief was a small price for [Chris] to pay for a reprieve from light pollution with this remote control laser hack. The streetlight in front of his house has a sensor that faces westward, and flips the lamp on once the sun has disappeared over the horizon. As it turns out, [Chris’s] third floor window is due west of this particular lamp, meaning he takes the brunt of its illumination but also conveniently places him in a prime location for tricking the sensor.

According to [Chris], the lamp’s sensor requires two minutes of input before it will switch off and stay off for around 30 seconds before cycling on again. The lamp does not zap straight to full brightness, though; it takes at least a minute to ramp up. [Chris] recalled a hack from a few years ago that essentially used LED throwies tacked onto the sensors with putty to shut off lamps for a guerrilla drive-in movie, but the sensors on those lamps were at the base and easily accessed. [Chris] needed to reach a sensor across the block and nearly three stories tall, so he dug around his hackerspace, found a 5V 20mA laser diode, and got to work building a solution.

[Chris] 3D printed a holder for the laser and affixed it via a mounting bracket to the wall near his third floor window, pointing it directly at the street lamp’s sensor. He plugged the laser’s power supply into an inexpensive remote control outlet, which allowed him to darken the street lamp at a touch of a button. This is certainly a clever and impressive hack, but—as always—use at your own risk. Check out a quick demo video after the break.

END_OF_DOCUMENT_TOKEN_TO_BE_REPLACED Whether you’re relegated to the backseat of your ride or just strapped for access to power, you may benefit from adding your own backseat USB charger. While this is a fairly straightforward hack, we’re surprised at how clean it turned out and at the convenience it provides.

[wongman2001] started by grabbing a socket wrench and unbolting his seat from the rails in the floor. He then disconnected the electrical plugs for the chair’s heating and power seat adjustment. With the chair disconnected and removed from the car, [wongman2001] further dissected its components, removing its back panel and test fitting a female cigarette adapter. Though this seat had plenty of room near the headrest, you may need to carve out some foam for a snug fit in your vehicle. To source the needed 12V, [wongman2001] tapped into the wiring for the seat’s motor, then soldered and insulated the connections to the cigarette lighter jack.

Check out some other clean-looking car hacks like the hidden MP3/USB Aux hack or the Nexus 7 double-DIN dashboard hack.