It’s official: all the hype around IoT is starting to get a bit annoying. Not because there’s anything wrong with building Internet-connected devices, but because so many people are trying to jump on the bandwagon with the same old “Future: brought to you by Megacorp #07”-mindset. Recycled visions of estranged professionals, with their homes, offices, business meetings and hotel rooms, all powered by the latest “one IoT platform to rule them all” – are back on. Even though the mythical “Smart” refrigerator didn’t changed the world back in 2001, I guess that there’s no harm in trying it again. After all, we have seen this working out great in software, with redos of dot-com era ideas turning into massive successes a decade later. 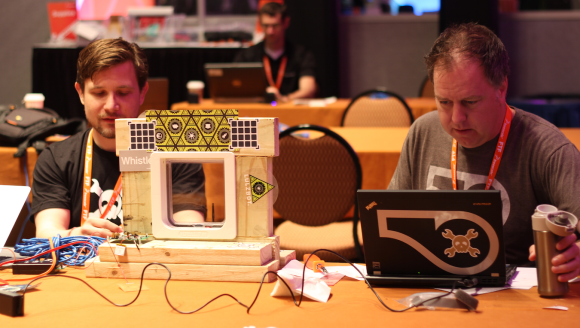 That’s all fine, and we wish everyone the best of luck, but the future we’re the biggest fans of is a hackable, community-built, open-hardware one. So when the guys from FTF2014 called us to host a two-day “lab” in which engineers would play around and try to come up with an interesting IoT product, we were more than happy to jump in and try to do it our way. We got roughly two dozen engineers to drop lectures and training classes and hang out with us in the lab. We got Freescale to hand out a whole bunch of FRDM-K64F boards and a couple of mbed.org guys to join us on-site and help out with the dev tools. Two days later, we had our winner – “Don’t Not Enter” by David Isbister and Ernie Aguilar. They did an amazing job, both in hacking up a great product (elaborate internet-connected cat flap door), but more importantly, in fixing a whole bunch of issues in the hardware/firmware/tools stack that we had on our hands. 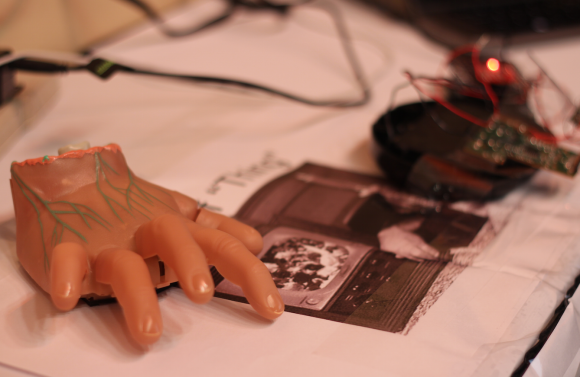 However, a true disruptive technology that came out of the whole event was our second-prize winner – Eli Hughes, and his project called: The Internet of “Thing”. You’ve guessed it – it’s the (Internet-connected) Thing from The Adams Family! In this ultimate display of subversive playful cleverness, Eli did more than just creating an interesting project. He called out a large audience of otherwise buttoned-up “professional” engineers to start thinking beyond RFID and obvious Smart devices and try to bring back a little bit of that wacky hacker spirit back into their work. 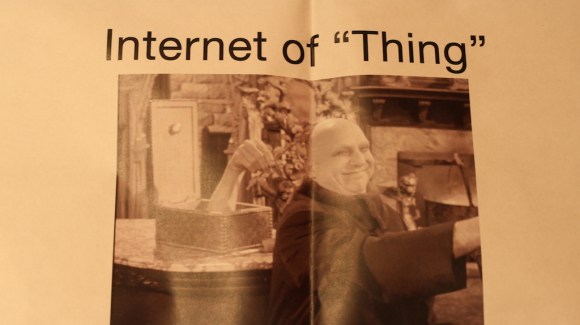 Eli’s project is pretty interesting on the implementation side too. He did some clever surgery on Fantasma Toys Hand Runner to boost the power and created a circuit that interfaces Thing’s built-in IR remote to the WiFi. He also built a cool command line interface and a touchscreen app, which communicate with the Thing via TCP server running on K64 board with RX-XV module. This setup allows for endless hours of fun, either by controlling the Thing via touch interface, or more importantly – by scripting its movement using the DSL shell. For more details, check out his project entry at hackaday.io. 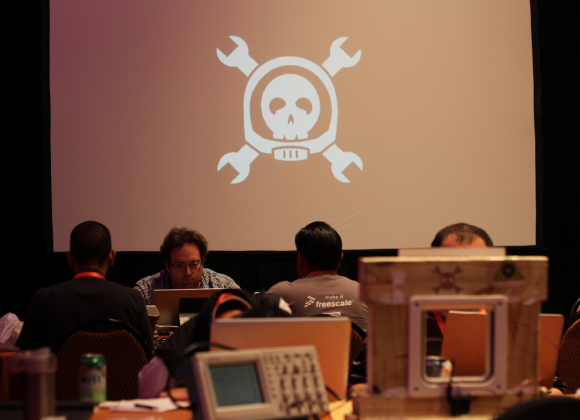 Hopefully, this project will serve as a great reminder for all of us that the future is not going to be just a “photorealistic version of Second Life” and if we’re to build projects that define it, we will have to try harder and come up with some truly creative and original ideas. And make sure we’re having fun along the way.

Hacking in the shadow of the skull