Somehow we picked two people in a row who are working on lab equipment as part of The Hackaday Prize. This is just a coincidence; we’re picking hackers who we think will be quite interesting to learn about.

Meet [Bradley Worley]. His contest entry is PyPPM, a Proton Precession Magnetometer which will be used for Nuclear Magnetic Resonance experiments. The “Py” at the beginning reflects the use of the Python API for control.

Let’s see what he’s all about:

I do a bit of everything… guitar, swimming, programming, and the like. But mainly electronics. I started playing with transistor audio circuits in college, and cut my teeth on vacuum tube audio when I had a chance to repurpose an old Eico 460 oscilloscope into a guitar amp. From there, it was on to Nixie tubes, 8-bit micros, etc… I love it all. [Image Source]

I’m an analytical biochemistry graduate student at the University of Nebraska. Most of my work revolves around multivariate statistics.

Learning. To learn how something works, I have to build it, or at least peer inside it: I accidentally broke my parents’ video camera as a kid, and within thirty minutes I was already asking to take it apart…

I’m the honorary sysadmin for my research group, which means I had to keep an eight-year-old Beowulf cluster from giving up the magic smoke. One day, I took the main node off the rack for a drive upgrade, and it stopped POST’ing. I almost grabbed a wrench right then… 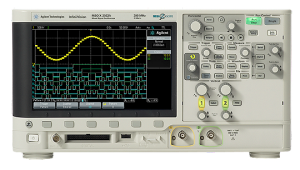 I had an Agilent MSO-X 2000-series oscilloscope for a year, and had to sell it for rent money. Not a day goes by when I don’t miss that beautiful, beautiful scope…

I’m a bit of a hipster when it comes to the AVR 8-bit micro: I designed for it before Arduino was cool… ;)

I always joke that my native language is C, but I’m decent at English too. Python is a close second.

Communication. You can be the most brilliant person on Earth, but if you can’t communicate your ideas clearly, it’s moot.

I love nuclear magnetic resonance (NMR), and I want to share that love by making NMR experiments easily accessible to the hacker/maker community.

The toughest parts of my project come at the interface of the chemistry/physics happening in the sample and the engineering happening in the circuit. For example, designing magnetic field gradient coils (and driving those coils) for low-field NMR systems isn’t particularly well-documented… Any practical advice on the best amplifier topologies for controlling the current flowing through a beefy inductor would be greatly appreciated.

A mass spectrometer, for sure. The engineering in such a piece of instrumentation is phenomenal.

I’ve been a Hackaday addict for years now, so getting featured because of THP is pretty awesome. Hi mom!