Remote sensing applications that make sense and cents? (sorry, couldn’t help ourselves) That’s what [hackersbench], aka [John Schuch], aka [@JohnS_AZ] is working on as his entry for The Hackaday Prize.

He received a multi-thousand-dollar water bill after having an underground pipe break and leak without knowing it. His idea will help you notice problems like this sooner. But if you actually have a way to capture data about your own water use you also have a tool to help encourage less wasteful water use habits. We wanted to learn more about the hacker who is working on this project. [John’s] answers to our slate of questions are after the break.

I would have to say building things. While very often that means electronics, I also do a lot of woodworking, and some metalworking too. I’ve been around long enough (I’m probably a fair bit older than most people reading this) that I have accumulated a lot of tools for all those pursuits. Whether it’s silicon, code, wood, or metal, I find the satisfaction of a completed design/build project equally, and highly gratifying.

I spent about 16 years working for Motorola in Manufacturing Engineering at a plant that produced computer circuit boards. 6809 through hole when I started, and we were doing 68030 double-sided SMT when I left. From there I went into being a manufacturers rep for EOS/ESD control equipment and material, as well as doing contract auditing and training for ESD management. After that I went into field sales for a number of high-end aerospace telemetry companies.

Most of that business, and virtually all manufacturing, dried up with the economy quite a few years ago so I say that currently I’m a consultant (but of course that’s code for the fact that what few companies there are prefer to hire inexpensive new college grads). No real sour grapes; I do consult, and do a fair amount of writing, and have quite a lot of time to play in my shops. But if the right manufacturing engineering job came along ….

Solving problems. And that includes improving things. While I would never knock pursuits that give other people joy, I’ve never been one for making blinky lights for the sake of having blinky lights. If the blinky light means I forgot to turn off my soldering iron out in the shop, or the pool pump back pressure is too high, or the dog’s water dish is empty .. I’m all in!

Often the problem I tackle is one of “I want (need) that but it’s really stupidly expensive!”. So I’ll build one. Sometimes it’s a simple hand tool of some sort, and at the other extreme is the 500 sq ft In-law suite (with full bath and kitchen) that I built single-handedly for our home.

Cheap-assed Chinese tools!!! Specific example: I have a band saw from a low-end distributor everyone knows. The blade guides broke in the first month. It’s impossible to keep the wheels aligned. The blade life is measured in minutes. It’s a total piece of crap, and I have other examples from the same place. I learned my lesson, and tell people whenever the topic comes up; You’ll be WAY better off buying a used piece of name brand (usually American) equipment than buying discount import crap.

(I really should sell the damn thing for scrap and just get over it.)

Honestly, I’m pretty operating system agnostic. I started with CPM, lived through all the Windows incarnations, Learned UNIX System V back at Motorola (as well as HP-UX), and have dabbled in Linux since before Red had a Hat. They all have their strengths and their weaknesses.

I will say two things; I do 99% of my work on Windows based systems because the hardware is so inexpensive and the OS really is pretty worry free, and I don’t own a single piece of Apple hardware. 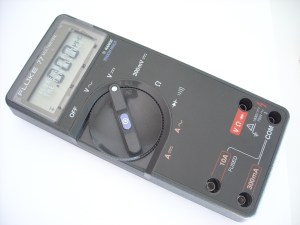 Favorite? That’s tough. I don’t keep gear that I don’t enjoy using. If you forced me to pick one I’d have to say the Fluke Model 77 multimeter that I’ve had for 25 years. It says something for a meter when you’ve worn out three sets of test leads  and the meter itself still works as well as the day you bought it. It’s easy, it’s rugged, and it’s operation is intuitive. It does what it does, and it does it flawlessly. I guess this choice is sentimental. This one meter has seen me through a few decades, and a few careers, and just keeps on going.

I’m going to pick three, and the first two are sentimental.

First is the LM3909. You could take this (long out of production) chip, add an LED, a cap, and a D-cell battery and the led would blink … for almost 3 years! It’s one of the very first parts I played with, and helped fire my passion for electronics.

Second would be the MC145436. This is an old Motorola DTMF decoder chip. You’d give it a colorburst crystal, an audio signal, and it would spit out DTMF digits as BCD. I used that part for all sorts of remote control projects when I was young, and was the basis of the very first product I sold … on Usenet. :-)

Modern stuff is a bit tougher. A lot of the Class-D audio amp parts impress me. As well as quite a few new motor controllers. And then modern sensors are just getting more and more amazing. But to pick one, I’d have to say my current favorite is the PIC microcontroller. Dirt cheap, low cost programming equipment, a good (and free) IDE. I just feel totally at home with them. Full disclosure, I’ve been playing with PIC micros for about 25 years.

Again, I’m kind of agnostic on this one too. Language to do what? Program a web page? I love hand coding HTML, and must have written a million lines of Perl code. Program a microcontroller? It’s got to be C, mostly because I spent years stuck in the misery of ASM coding. A Windows app? Honestly, I do very little of that, and often stick with Perl for that too. Though I have just started teaching myself Python.

I’ve always had a soft spot for Ladder Logic as well. Seems more like puzzle solving than programming. What’s more, when you tell people you program in Ladder Logic, most have absolutely no idea what you’re talking about. Fun.

But really, I am much more a hardware guy. These days, however, you can’t get very deep into hardware without bumping into code. About ten years ago we had an underground water pipe break while we were on vacation. I didn’t discover it until I received a water bill for several thousand dollars. Luckily the city gave me a huge once-per-lifetime credit, but since then I’ve thought that the fact that you can only see your water consumption once per month is profoundly stupid. Particularly when everyone is pushing us hard to conserve water. In engineering terms; a feedback-loop that takes 30 days is bound to fail.

Over the years I’ve considered the problem MANY times, but all the solutions I came up with were ridiculously expensive, or stupidly complicated to build and install. And further, no one but me (or other true geeks) would actually build one, so it would be of relatively low value in a societal sense.

The turning point was discovering the sensor I’m using (MAG-3110), a three-axis magnetometer intended be a compass and orientation sensor in tablets and cell phones. The thing about the sensor is that it is VERY sensitive, sensitive enough to detect the orientation of the magnet inside most non-reporting water meters in use today.

The Hackaday Prizes focus is on the future. And yeah, a whole lot of the future is in space and with new technology, but I think a whole lot of our mental energy ought to be focused on cleaning up our act right here on Earth. Because really, the future depends on it.

Um … not really. That sounds conceited, doesn’t it? Really, I hang out on an IRC channel with a bunch of amazing engineers, and we all help each other out a lot. It’s kind of like having an assortment of gurus in my back pocket.

I’d love to see a PRACTICAL 3D printer that could produce small buildings and structures in concrete or some other long lived material. Yeah, there have been a couple of university projects, but I’d love to see the hive of genius we call the Maker Movement tackle the problem. (I think it’s as much an issue of budget as it is technology)

Rules were made to be broken