Here’s the basic technical breakdown for Aura. A bunch of PCBs with large coils and LEDs (and little else) are somehow stuffed into glass ball ornaments. These ornaments are powered via RF supplied by a coil that snaps around the tree and plugs into the wall. The coil is able to power the lights up to about five feet away. For trees taller than five feet, you can snap the coil around the middle of the tree. A coil will be able to power up to about 100 lights. The smartphone ‘scheduling’ is done directly at the coil turning all the lights on or off, so there’s no worrying about the insane power requirements of putting WiFi in dozens of glass globes.

There’s no question in my mind that something like this can exist. The LEDs in each ornament draws a tiny amount of power, and since you can charge a cellphone with a Powermat or other wireless charger, it’s not unreasonable – even considering the inverse square law – that you could power a few LEDs with a really big ‘power ring’. EMC tests are another thing entirely, but at the very least it’s possible.

However – there’s always a however – something about this doesn’t pass the sniff test. It took me a while looking at the Kickstarter campaign until I caught it, and now I have questions that can’t be answered. How on Earth did they get that PCB inside a glass ball? Yes, it’s the classic ship in a bottle problem, only you can’t really assemble a PCB inside a glass ball.

Those aren’t plastic balls, either. The creators of Aura say specifically that they’re glass:

The plastic ones we’ve experimented with are actually pretty cool, just not as “classy” as the clean glass ones, which is why we didn’t start there… Since this is a brand new technology, idea, and implementation, we needed to focus on delivering, so hence the subset of options available for the time being.

It’s a curious thing looking over dozens of shady Kickstarters every day. Most of the projects are easily digestible, and you’re able to make a judgement about the feasibility and potential success of a project rather quickly. Very rarely, you’ll look over a project and something that seemingly insignificant will catch your eye. A great example is fitting a chip into too small of an enclosure – a fairly insignificant detail that’s like tugging a loose thread that unravels the whole campaign.

Here we are with Aura, something that’s probably, maybe possible, but with an unanswered question in the back of my mind. And so we go looking for more.

Here’s a video from the Aura campaign that’s so saccharine it would have given [Norman Rockwell] diabetes. It’s exactly what you want in a Kickstarter video: don’t show the product, only show how much better your life will be with the product. The only voice over for this video is, “There are a lot of firsts in your world. Your first steps. Your first Christmas. And now, the first ever wireless Christmas lights.” We desperately need media theorists to start trawling through Kickstarter videos.

Pretty bland, huh. Let’s take a look at two frames from this video. The first frame shows a boy putting a clear glass ornament on a tree. Pay special attention, because there’s nothing inside the ornament. 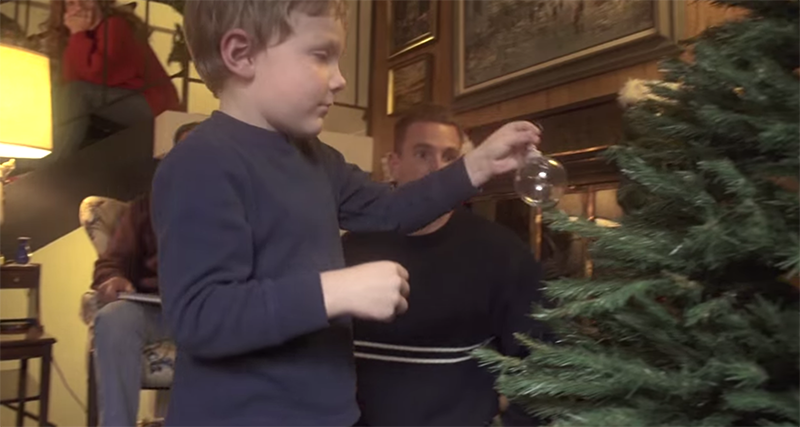 Mere seconds later, the ornament magically lights up though the power of the Christmas spirit and a device you can fund for $69 on Kickstarter: 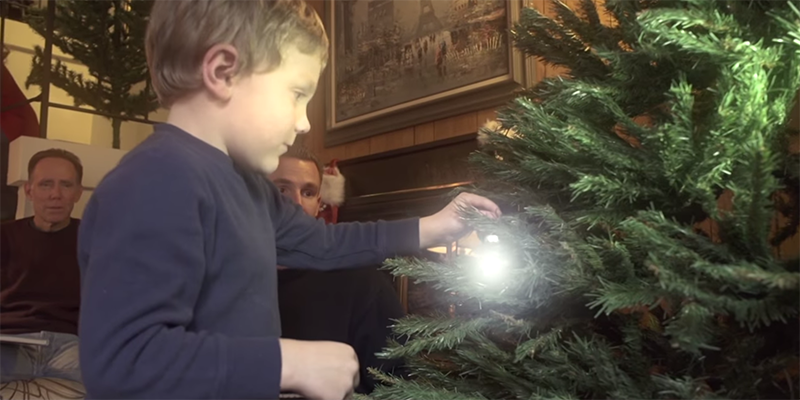 A beautiful family gathering, a great interplay of light and shadow, and very good evidence the light coming from the ornament was added in post. Look very carefully at that last picture, and you’ll see how it was done. A spot was placed off to the right; half the tree is lit from the wrong direction. A little bit of Sony Vegas or Final Cut takes care of the actual ornament lighting up – and the light coming from the ornament is far too Gaussian if that word is an adjective. Actually, all arguments about lighting are moot, because we already know there wasn’t anything in the ornament to begin with.

I’m done. After seeing this, I literally cannot evaluate Aura anymore. The Aura team is presenting obviously faked video as a real, wireless Christmas light. I can’t figure out how they fit a PCB in a glass ball. I’m not even going to try to parse the claim, ‘The Power Ring safely creates a magnetic field and only transfers energy when a receiver comes into its field.’ This, of course, is where you come in. Comments are open, guys. Let’s hear your take.

71 thoughts on “Christmas Lights And Ships In A Bottle”