As announced by [Massimo] in his “State of the Arduino” keynote speech at the BAMF, Arduino is licensing Adafruit to produce a range of the “most-requested” Arduino boards at their factory in New York. So those of you looking to support Arduino LLC with your purchases also get to help line [Ladyada]’s pockets at the same time. That’s a big win in our book.

It’s not a complete surprise that Adafruit should get tapped as a US fab for Arduino.cc. They’ve been selling the boards and producing copious Arduino-related tutorials since their beginnings in 2005. More recently, Adafruit partnered with Arduino LLC to create the Gemma board, which is basically an ATTiny85-based Arduino-a-like in a tiny round, wearable-friendly board. (If you’re familiar with the Adafruit lineup, it’s essentially a Trinket in the round format of a LilyPad Arduino.)

Indeed, after the deal is done and the dust has settled, it’s a bit surprising to us that this hasn’t happened earlier, what with both Adafruit and Sparkfun producing licensed boards and Arduino LLC looking for new manufacturers. Anyway, good job Adafruit and Arduino (LLC)!

Arduino SRL had its Yun Mini, which is essentially a smaller version of the Yun — a mashup of an Arduino Leonardo with an OpenWRT-capable router chipset. We’ve reported on these previously but it’s fun to see them in the flesh.

The M0 is interesting. Before the troubles began, Arduino designed an ARM-M0+ based board with Atmel. Now Arduino LLC has it listed on their website as the Arduino Zero, but still hasn’t got any for sale yet. Arduino SRL has the boards on their website as the Arduino Zero Pro, with a different name, but is now touting this version as the “M0 Pro”. What’s in a name? Not much. The circuit layouts and parts appear identical.

Both of the Arduino companies are working on getting your Arduino development into “the cloud”. (Conscience compels us to note that “the cloud” is actually just other people’s computers.) Anyway, this essentially means new web-based and browser-based versions of the IDE that tie into web services. Interestingly enough, the two companies have different takes on what that entails.

According to their Maker Faire press release, Arduino SRL will be launching a web portal for makers to “promote and distribute their products” and share code and ideas. Located at my.arduino.org (which currently seems to be password-access only), the idea seems to be to create a mini-Tindie for Arduino-based products. This couples with their “Arduino IDE-alpha”, a JavaScript-based IDE that will run in the browser. 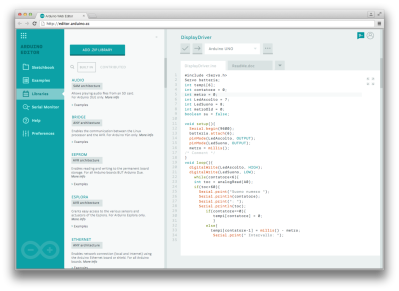 Meanwhile, Arduino LLC displayed previously announced their alternative development platform, Arduino Create. Arduino Create lets you write, compile and upload sketches “directly from the browser with the Arduino Web Editor”, and store your code in the “Arduino Cloud”. Arduino Create looks slick: certainly a lot better than the homely Java IDE that we’re all used to. It’s too early to tell what this “cloud” is all about, but it looks like it will include code sharing, schematic and wiring hookup storage, and easy sharing among users.

We already use blogs, Hackaday.io (shameless plug!), Github, and other “cloud” services to store our projects and code, so we’re not entirely sure what either of these portal offerings will bring to the table. It’s 2015, is anyone still hurting for project hosting space on the web?

Cynically, we note that both of these companies are in a battle to “own” the Arduino community and that getting people to host code and projects on their servers is an obvious strategy, and providing a web-based IDE to facilitate this capture is the tactic.

And before we leave “the cloud”, we should note that both Arduinos are late to the game. codebender has been around and programming Arduinos on the web since 2012.

Finally, as if it weren’t bad enough with Arduino LLC and Arduino SRL, [Massimo Banzi] also announced that licensed boards for the European market will be sold under the new “Genuino”.

Actually, this is a pretty cagey maneuver, because it side-steps the European trademark issues (which [Massimo] referred to as “the bullsh*t” in his talk) and is a cute name to boot. “Genuine”, get it?

Our take? As [Massimo] almost said in this video interview with Make, “a rose by any name would smell as sweet.” If Arduino LLC loses the trademark lawsuit in Italy, they’ll not be allowed to sell boards using the “Arduino” name. The best way to limit the damage in the future is to make the switch now, while everyone is watching, and give the market time to adapt.

67 thoughts on “Adafruit And The Arduinos At Maker Faire”