Berlin was a good city to be a geek in last weekend. Alongside the Berlin Maker Faire, there was the 2015 meeting of the Vintage Computing Festival: Berlin (VCFB). Each VCFB has a special theme, and this year it was analogue computers, but there was no lack of old computers large and small, teletext machines, vintage video game consoles, and general nerdy nostalgia.

We spent a lot of time playing with the Electronic Associates, Inc. EAI Mini-AC that came from the collection of the Heinz Nixdorf Computer Museum. It’s a miniature analog computer that was probably designed for training purposes, but could be used for a few interesting demos. It has most of the analog circuits you need to do math: integrators, adders, multipliers, limiters, comparators, switches, etc. It was programmed up with a bouncing ball in a box simulator (with gravity!). 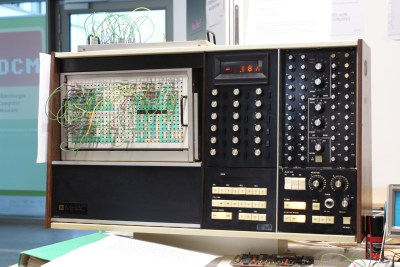 A very clever feature of this computer is that the entire faceplate pulls off so that you can save a working program. (You can see another program plate sitting on top of the machine.) The pins poke through the faceplate and make contact inside when it’s properly installed. Unfortunately for modern vintage computer curators, this means that the machine has special pins compared to the other machines on display which all used regular banana plugs.

Another very cool feature of the EAI Mini-AC was that it had a run/stop button. How can you stop an analog computation, you ask? Lots and lots of internal switches and some clever circuitry. In addition to hand-wiring (programming) the computer, there’s a switch inside just before each amplifier circuit that disconnects the incoming signal. When the stop button is pressed, all the inputs to all of the amplifiers gets disconnected, and the value should hold for a while. If you’re us, you’d expect the voltage on the capacitors to sag slowly over time. As we stood there watching and talking about how it was built on the inside, the displayed number didn’t change in the third decimal place for at least five minutes.

There’s a ton of other fancy circuitry inside this beast. The op-amps of the day were all built out of discrete transistors, and nonetheless had chopper stabilization to minimize the offset voltage. Differences of very tiny voltages matter tremendously in an analog computer, and it is exactly analog’s amazing demand for precision that ended up killing off the analog computers in the end. 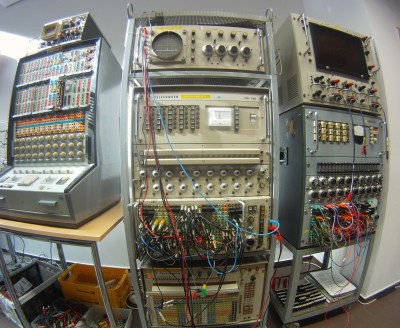 [Dr. Stephan Höltgen] brought along these racks of analog gear from the 60s and 70s. Included was a tube-based(!) Heathkit EC-1 learning computer, and a bunch of Telefunken gear.

Even with the beautiful lights and hands-on pleasure of plugging in patch cables to implement mathematical functions, nobody I talked to in the analogue computing exhibit would want to turn back the hands of time and ditch their digital computers, much less spend the time to make a recreation of one of these analog beasts. We think that this is all the more reason that they’re preserved as-is: they’re a great deal of fun to play around with, but once these are gone nobody will have the patience and knowledge to rebuild them.

You might be forgiven for thinking that if nobody would recreate analogue computers, the same would hold true for the early exemplars of the digital era, but you’d be very, very wrong. To look at the east wall of the exhibit, you’d think you were in a DEC PDP museum. 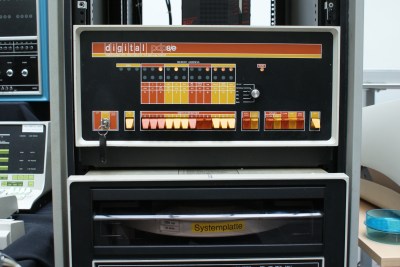 [Phillipp Hachtmann] brought along a complete vintage PDP-8/e running just as fast as the day it was built, which was reading in tapes that were driven up from Munich just for the festival. (All of the data on the tapes was being saved to more modern media for convenience. The one loading at the time we asked seemed to contain largely computer games.) The computer itself and even the tapes that it was running seem surprisingly robust, having remained readable from the mid-70s until today. Good luck saying the same about your current laptop and its hard drive in 2055. 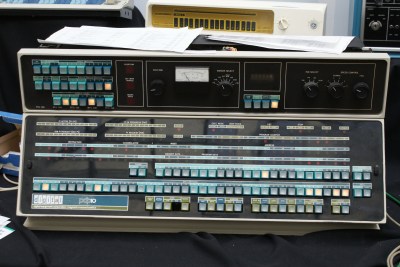 Next to the real PDP-8 was a slew of real PDP faceplates. [Jörg Hoppe] and his project brought a bunch of these back to life again, albeit with modern internals. We’ve actually covered this particular build before, but the short version is that there are custom adapter boards attached to the faceplate that then allow it to be run from a BeagleBone utilizing PDP-10 emulator software. [Jörg] also has fantastically-detailed simulators of each of his faceplates available online for you to check out. Built from real photos of the real faceplates, each LED is unique and many of the switches are slightly wonky; the simulations have 95% of the charm of the actual faceplates, but weigh about 100 pounds less. If you use a touchscreen, you may not even miss the difference. 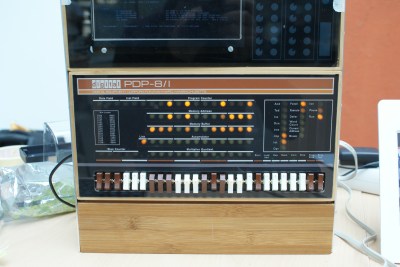 Progressing from the vintage to the half-vintage, we came to a fully-modern rebuild of one of the earliest PDP-8 models, the PiDP-8/l, which is also a project on Hackaday.io in the running for our 2015 Hackaday Prize Best Product award. When I asked [Oscar Vermeulen] why this particular computer, he pointed out that it’s the PDP-8 model with the most blinkenlights. We don’t need further convincing.

Anyway, the PiDP-8 project takes [Jörg]’s adaptation of the old PDP faceplates a step further and re-creates them entirely from scratch, drastically simplifying all of the interface electronics and shrinking a fully realistic looking PDP-8 clone that runs on a Raspberry Pi and can sit comfortably on your desktop. If the actual PDP-8/e takes a small moving van to carry around, and the faceplates can probably fit in your hatchback, the PiDP-8 project gives you a PDP clone that you can bring in your carry-on luggage. But you don’t get that old-tape-drive smell. 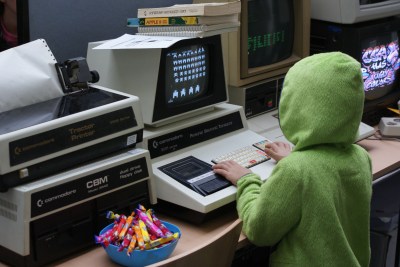 Most time spent at the VCFB was in yakking about old computers, but when it was time to take a break there was a whole room dedicated to old video game consoles, and even many of the regular exhibitors were loading up their favorite games on their exhibited computers when they had a little downtime. Mario Cart in the original SNES version was a crowd pleaser, and was occupied each time we tried to sneak by and give good old Yoshi’s tires a spin.

There was an old Atari Activision Track and Field game with these original hardware pedals that seem to have been designed for the game. Instead of mashing buttons as fast as you could to make your character run, you had to tap your feet. It gave the game an entirely more realistic feel, and was probably half-decent exercise to boot. The Wii Fit isn’t looking so revolutionary anymore.

Even 3D gaming doesn’t seem so forward-thinking. We’d never played Nintendo’s 1995 3D Virtual Boy console until last weekend, and it was good fun. It had Mario’s Tennis installed, which made good use of the 3D effect. Apparently, the Virtual Boy has a vibrating mirror inside that alternately projects a channel to the left and right eyes to produce the 3D image, and you could hear the machine whirring a little bit.

If you’ve got any kind of technostalgia (we just invented that word) or just want to see what all the fuss is about, have a look at the US or European (read: German) Vintage Computer Festivals near you, troll through our archives, or simply stay tuned for more coverage because we’ll definitely be going back.

And if there’s any particular old-computer fetish that you want to get off your chest, or just have us be on the lookout for, let us know in the comments.