You may not have heard of a Stellarator before, but if all goes well later this month in a small university town in the far northeast of Germany, you will. That’s because the Wendelstein 7-X is finally going to be fired up. If it’s able to hold the heat of a fusion-capable plasma, it could be a huge breakthrough.

So what’s a stellarator? It’s a specific type of nuclear fusion containment geometry that, while devilishly complex to build and maintain, stands a chance at being the first fusion generator to achieve break-even, where the energy extracted from the fusion reaction is greater or equal to the energy used in creating the necessary hot plasma.

There’s an awesome video on the W7-X, and some of the theory behind the reactor just below the break.

Most fusion reactors are tokamaks, which are doughnut-shaped reactors wrapped in superconducting magnets that contain the plasma inside the loop. The problem with tokamaks is that they don’t have an intrinsically uniform magnetic field inside because, put simply, the coils on the hole of the doughnut are closer together than those on the outside. This makes the plasma want to wander outward and hit the walls, which isn’t good. 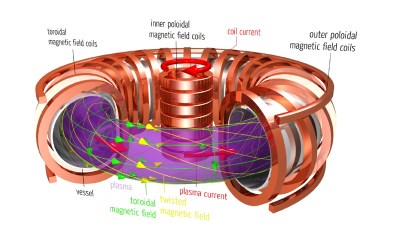 To compensate, a tokamak induces a circular current within the plasma as well, which pulls it inwards. The problem with this is the heat in the parts that induce the current as well as instabilities in the current as it runs through the plasma itself. This means that tokamaks can’t run for very long: we’re talking a few minutes at most. This makes it very hard for tokamaks to produce more energy than it takes to fire up the plasma in the first place. (Tokamak schematic courtesy Max Planck Institute.)

Stellarators get around this by twisting the path of the plasma. The original stellarator design, invented by all-around physics-badass [Lyman Spitzer], twisted a loop into a figure-8 shape. The point is that the plasma that’s on the inside of the track in one half of the eight is on the outside in the other half, and there’s no need for the tokamak’s toroidal plasma current. The W7-X twists the plasma band five times as it moves around what’s essentially a circle.

And this means that there’s a chance of containing a plasma for a much longer time in a stellarator, and eventually breaking even on the startup energy. The only problem is that making one is devilishly difficult, even with the benefit of a billion Euros and the best German engineering. Just looking at the number of access ports on the W7-X gives you a bit of insight into how incredibly complex this machine is. 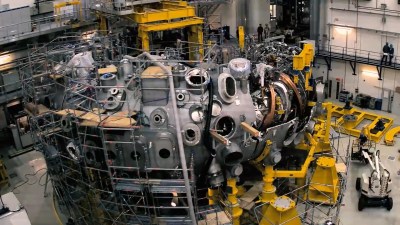 According to this coverage in Science magazine, the W7-X project was given the green light in 1994, and was due to be completed by 2006 at the cost of €550 million. But the reactor involves 425 tons of specifically-shaped superconducting magnets and the subsequent cooling apparatus. They ran into manufacturing troubles with the magnets, with a third of them failing inspection and one of the firms producing them going bankrupt.

Not that delays or cost overruns are uncommon in fusion reactors — the ultra-large ITER tokamak is probably going to cost around thirteen billion Euros (three times the original budget) and be eleven years late by the time it’s firing a plasma in 2020. Creating stable nuclear fusion just isn’t easy.

But the W7-X looks to be ready for a real plasma firing any day now. They’ve already pre-tested the containment on (cold) electrons, and everything’s reported to be perfect. If they can keep a hot plasma stable for a long(er) time, it may pave the way to actual fusion power generation. Keep your fingers crossed!