In just a few short days, Fallout 4 will be released and a substantial portion of the Hackaday staff will be taking the day off. As you would expect, a lot of people with 3D printers, soldering irons, and far too much time on their hands are getting pumped for the Fallout release. Here’s a few Fallout builds we’ve found over the past few weeks: 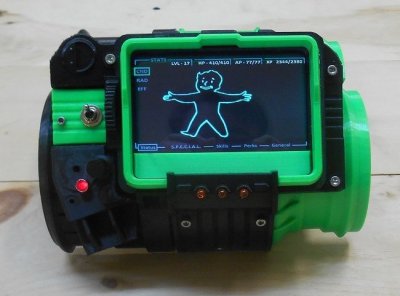 The most iconic thing you’ll find in a Fallout game is the Pip-Boy, the UI for the player and a neat wrist-mounted computer (that somehow has a CRT in it, I guess) for the player’s character. Hackaday’s own [Will Sweatman] built his own Pip-Boy 3000 that’s completely functional. The build uses a 4.3 inch touch display, a 10 position rotary switch, and a bunch of 3D printed parts.

Elsewhere on Hackaday.io, [Karl] is working on a functional Pip-Boy controller for Fallout, and [cody] built one with a Raspberry Pi. Of course, if you’re super special and have two thousand dollars to blow, Bethesda released a limited-edition Pip-Boy edition of Fallout 4 that’s compatible with most cell phones.

There’s more to Fallout than just wrist-mounted computers, and for the true aficionados, there are gigantic gear-shaped doors. [TreyHill] has a partially finished basement with a gaming room tucked behind his very own vault door. The door itself is built out of plywood and rolls along a gear rack mounted to the floor. Will it hold up to a nuclear blast? Probably not. Is it up to code? It looks cool, at least.

[Lilykill] on Thingiverse is extremely capable with a copy of solidworks and produced a bunch of 3D models from the Fallout universe that includes power armor, ray guns, more Pip-Boys, plasma grenades, and a Nuka-Cola truck.

Fallout 4 for the Apple II

Fallout 4 will be available for the PS4, Xbox One, and PC, leaving out a large contingent of retro gamers. Fear not, lovers of the 6502: there’s’ a version for the Apple II:

This tribute to both the Apple II and Fallout was made with the Outlaw Editor, an SDK for pseudo-3D game development on exceedingly old hardware. There’s actual ray casting happening in this tribute, and it works just the same as Wolfenstein 3D or the like.

24 thoughts on “Dealing With Fallout”