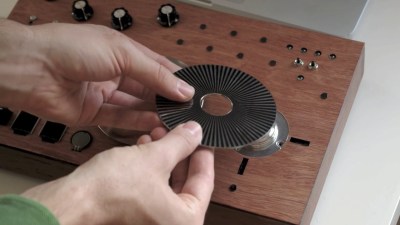 We love the loopy Musique Concrète demonstration of the two jog wheels in action combined with the various sliders. It’s quite expressive and moody. But don’t neglect the utility of a bunch of (ten? twelve?) sensitive touch points. [Jan] demonstrates the touch points in this video. It’s amazing what you can do with a bunch of nails and some code!

And speaking of code, [Jan], we’d love to see what’s going on under the hood of this beauty. When you get the chance, toss us some schematics and code?

23 thoughts on “Two Turntables And No Microphone”