Robots and DIY electronics kits have a long history together. There probably isn’t anyone under the age of forty that hasn’t had some experience with kit-based robots like wall-hugging mouse robots, a weird walking robot on stilts, or something else from the 1987 American Science and Surplus catalog. DIY robot kits are still big business, and walking through the sales booths of any big Maker Faire will show the same ideas reinvented again and again.

[demux] got his hands on what is possibly the worst DIY electronics kit in existence. It’s so incredibly bad that it ends up being extremely educational; pick up one of these ‘introduction to electronics’ kits, and you’ll end up learning advanced concepts like PCB rework, reverse engineering, and Mandarin.

The kit in question comes from Banggood and bills itself as an NE555 Educational Training Part. “The robot is the result of scientific and technological progress of the new development of educational robot kit,” the product details say, and, “it has circuit streamlined, practical, strong learning and still have strong interest and so on, are part of an entertainment teaching in music teaching.” More effort went into this translation than the kit itself.

In the spirit of all YouTube channels, the first video is the unboxing. Inside this package is a plastic robot. Add three AA batteries, flick the switch, and the robot will walk forwards thanks to a COB module stuck inside its head. Simply by adding batteries, this is a complete, working robot. This leads us to ask what the kit actually is. Apparently, the kit is a single-sided board consisting of a 555 chip, a few transistors, caps, resistors, and an LED creating an H-bridge driver circuit for the robot’s motor. Yes, this electronics kit is effectively a replacement for the electronics. Completing the kit will allow no additional functionality, and is by any practical measure a complete waste of time. 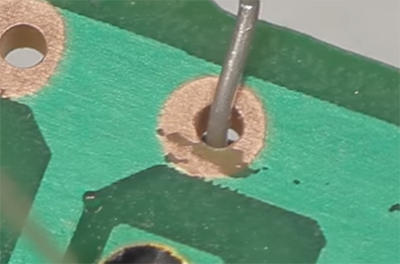 The kit is stupid to begin with, but how about the quality of the kit? Are we looking at professionally made circuit boards, properly labeled components, parts that actually fit in the holes, and traces that aren’t broken? No. the second video in this series reveals the kit has none of these desirable – or even necessary – qualities. The copper pads oxidized too easily, traces were broken, parts weren’t labeled, and the whole thing is actually a mess.

After reverse engineering the circuit, picking up a little Chinese, fixing the broken traces, and assembling this kit, [demux] was left with a robot… that walked forward. Just like it did several hours before when he first put the batteries in. The performance was even worse than before, making this not only one of the worst DIY electronics kits, but also one of the most useless.

As far as reviews and teardowns go, this one is brutally honest. That something like this could be called a kit, and sold as something that would ‘teach electronics’ is laughable. Teaching electronics with a PCB, bag of components, and a soldering iron is weird. There’s no real pedagogical value and kits don’t really teach a 10-year-old to become an EE; they teach them to become a tech. Only with incredible documentation do you get to something resembling an education in electronics, and the single page of instructions for this kit is entirely in Chinese.

That said, if you’ve ever needed a kit to teach rework, failure analysis, and how much flux you really need when you’re soldering, this is the kit. It’s so bad it’s good, and so pointless that you’ll end up learning something – not to waste your time on impossibly cheap electronics.

35 thoughts on “Crappy Robots And Even Crappier Electronics Kits”