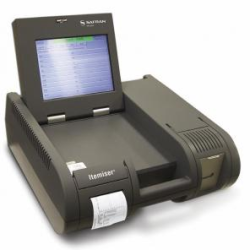 A security firm, Morpho, is working on something they call “the tunnel of truth”–pedestrians walk through the tunnel, and it scans them with multiple sensors, including things like IMS, facial recognition, and even analysis of eye movements to detect nervous people. To Sci-Fi fans this sounds like the public transportation scanning from the movie Total Recall which is where the image at the top of the post comes from.

The Sounds of Micro Explosions

Lincon Laboratories has another remote answer. Dynamic photoacoustic spectroscopy (see figure below) uses a laser to sense remotely gasses and aerosols. Looking for the right signature can allow that device to find explosives from a distance (up to 100 meters away). 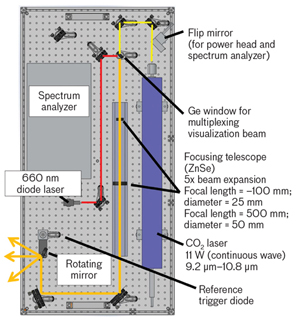 Curiously, the system works by listening for the sounds of tiny detonations. The laser uses a frequency that vaporizes molecules found in explosives, and the device listens for the nearly undetectable sound of that event. Researchers claim it can detect 200 nanograms per square centimeter of material on a moving car door handle.

There are other laser-based systems including G-Scan, which uses Raman spectroscopy and a green laser. Some systems employ microwaves. Everyone agrees that a system that could detect explosives quickly and without many false positives from a distance would be a good thing. In fact, some systems could even detect bomb making facilities and stop a bombing before the bomb even exists.

At Hackaday, we often talk about hacking for the greater good. We have a large community of smart people. Maybe we need to start thinking about this problem. A simple open source explosive detector that worked could be a game changer, not only against terrorism but perhaps solve other problems like land mines.

I’m hoping the comment section will generate some ideas on how this might work. Don’t just think of cameras and spectroscopy. Think outside the box–that’s what our community is best at doing. A good enough idea might attract some interest and maybe one day soon we’ll feature a Hackaday.io project that can detect suicide vests or other dangers to innocent people. That’s a hack that would make the world a better place for everyone.