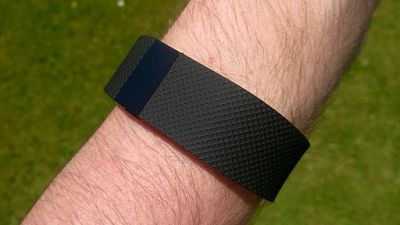 Modern Bluetooth devices can implement “classic” Bluetooth, BLE, or both. As you might expect, BLE is very power efficient and  should run for months or years on a simple button cell battery. It is also supposed to be small and inexpensive. If you have a fitness band (like the FitBit at left) or a smart watch, it probably relies on BLE. Range is usually somewhere less than 30 meters. 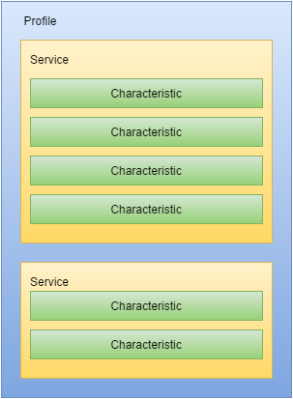 To conserve power, BLE devices don’t transmit very much. Bluetooth devices use profiles that describe what data and services they offer. All BLE devices use profiles derived from the Generic Attribute Profile (GATT). GATT uses UUID (those long hex numbers) to identify services and characteristics. Official services have a 16-bit ID while custom ones have a 128-bit ID. Servers are devices that have data like fitness bands, embedded thermostats, or beacons (BLE devices that send an ID and possibly a small amount of other data). Most devices will offer multiple services (see figure right).

As part of the power conservation scheme, servers have data and spend most of their time asleep. For example, a BLE temperature sensor would act as a server. The client is the cell phone, tablet, or desktop computer that wants to read the data. This can seem backwards, but it is just a matter of picking your frame of reference.

Servers periodically advertise the services they have using a very short message. As part of the advertisement, the server can include a small amount of data or it can tell others that it will not accept connections (or, often, it will do both). When a server sends all of its data via an advertisement and won’t accept connections, it is known as a beacon.

There are many standard services defined in the Bluetooth standard. For example, many devices will provide a battery service so a client can ask the device about its power state. However, it would be a boring device that only provides its battery level.

Other services are geared at BLE’s target markets. For example, there are services that provide blood pressure, running speed, or weight (as in body weight). There are also specialized services like “find me” that causes the server to beep or otherwise indicate where it is.

If you are familiar with traditional Bluetooth, the names won’t throw you. However, if you haven’t worked with the older system, it might help to remember that:

There’s a lot of detail about the BLE internals you can find in the Bluetooth specification. However, in practice, you probably won’t write your own BLE stack. Instead, you’ll use a chipset or a development board that provides an API (like the Tiny BLE that appears to the right).

Abstraction is especially useful for BLE because every microsecond of transmit time is burning battery. You hope the manufacturer has fine-tuned the stack to get the most from their hardware. Sure, maybe you could do better with a lot of effort, but it would likely be hard work. Next time I’ll look at one of those development boards and the API it presents to make BLE development simple.

Meanwhile, you can learn more about BLE (also known as Bluetooth Smart) in the video with [Jimmy Ray Purser] below. [Jimmy Ray] has an inimitable style of presentation.

21 thoughts on “Lazy Bluetooth: Build With BLE, Don’t Reinvent It”