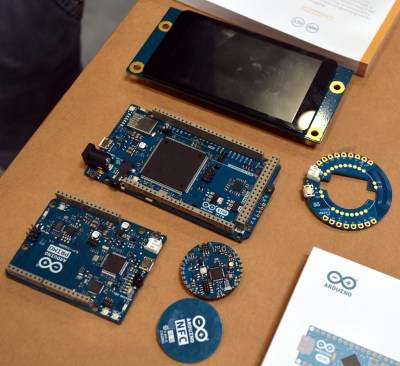 The same nRF52 microcontroller is present on the Arduino Core and the Alicepad, which are targeted at wearable electronics. The circular form factor of the Alicepad mimics the familiar sewable form of the Lilypad.

Arduino’s other offerings are where the horsepower really gets crazy. The Otto board boasts a gigantic STM32F469: a 169-pin ARM Cortex-M4F clocked at 180 MHz. The chip has a ridiculous assortment of built-in peripherals, and you’re not likely to run out of either pins or CPU cycles. It’s also got a hardware graphics accelerator, so it’s no surprise to find that the Otto has a DSI-IF connector on the back that is designed to plug into the LCD screen also being demonstrated at the event: a capacitive touch 480×800 display. The Otto also includes an ESP8266 to provide WiFi (why not, right?).

There are a few question marks in my mind on this one. First off, the Otto and the LCD have a product-family designator of “Star” which will be assigned to all the boards that feature the STM controllers. This seems a bit confusing (Star Otto, Star LCD, etc) but I guess they want to differentiate them from the “normal” Arduini. But are these devices becoming too complex to bear the Arduino name? Maybe, but the UNO is always going to be there for you and the new boards give you access to newer and more powerful features. Whether or not this complexity can be easily harnessed will depend on the software libraries and the IDE. After all, I think Donald Papp made a great point earlier in the week about the value of Arduino comfort in custom electronic work.

Finally, I asked Federico if there is any news about the Arduino versus Arduino trademark litigation. He spoke with us almost a year ago on the topic, but he had no new information for us at this point. (The US court case may be ruled on as early as July of this year, so there’s probably not much he could say, but I had to try.)

Federico spoke a little bit about the conflict between the two Arduinos, and said that it was brewing inside the company long before he got there. And it does appear that both companies calling themselves Arduino are trying to outdo each other with new boards and new initiatives, and going in different directions. If there is a bright side, it’s that this competition may end up building us better hardware than a single company would, because both are making bets on what will put them out ahead of the game.