For his build, [Richard] used a Sharp GP2Y1010AU0F dust sensor. This $11 device has a little hole, through which airborne dust particles can pass. On the inside, an infrared LED and a photodiode are arranged in a way that allows no direct light, but only light reflected by the passing by dust particles, to reach the photodiode. An accurately trimmed amplifier within the sensor package translates the diode’s photocurrent into an analog output voltage proportional to the dust density. With a bit of software wizardry, it’s even possible to differentiate between house dust and smoke by analyzing the pulse pattern of the output voltage. 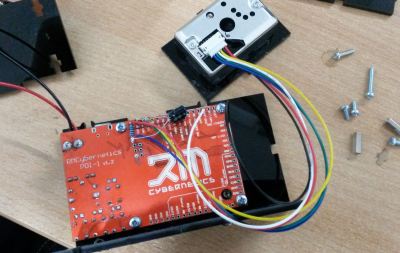 The development board used in this project, a PDI-1 (which stands for Programmable Device Interface) is [Richard’s] own design. Manufactured in the UK, it isn’t the cheapest, but it’s the part that makes this build a breeze. It’s basically an Arduino Nano with a lot of onboard peripherals, including a large graphic LCD, some buttons, a speaker, plenty of H-bridges, and a few more.

After bodge-wiring the dust sensor to the board and taking the enclosure out of the laser cutter, the hardware side of this project was almost done. A little fan was added to ensure airflow through the sensor. Eventually [Richard] wrote a basic firmware to display a graph of sensor readings on the LCD. A first test in the exhaust stream of his car, cycling through idling and revving as shown in the title image, suggests that the meter works as intended. Of course, air quality and emission testing depend on more parameters than just dust density, but if you want to replicate and extend this build, [Richard] provides you with all the Arduino compatible source files.