We’ve seen custom controller mods for Kerbal Space Program before, but a group calling themselves the Makerforce went a step further with their design and build of the KSP “Overkill” Command Station, which has much more in common with a fancy standup arcade unit than a custom controller. Kerbal Space Program is a hit indie game that, among other things, simulates the challenges of spaceflight. Like most games, you use the mouse and keyboard for control but many fans find this too limiting. With the help of a software mod that exposes control and status information over hardware serial communications, the door to full telemetry and remote control was opened to just about anyone to craft their own custom hardware such as flight sticks and status displays. Not content with the idea of having just a joystick and a few buttons critical for the flight process, this project took a different approach. 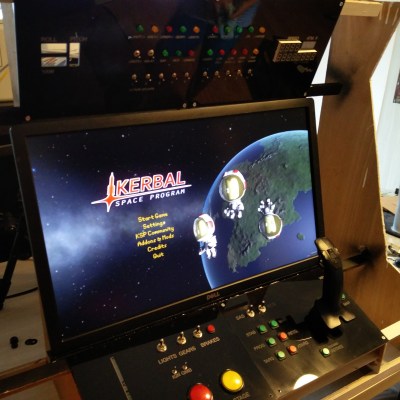 The KSP Command Station is self-contained with an integrated monitor complete with custom-made frame and housing, and was partly inspired by NASA mission control stations. Every single switch and button needed for playing Kerbal Space Program is built right into the unit – not just the ones critical to flight. A lot of design and construction care went into this unit, and it shows.

Kerbal Space Program has a thriving mod community, and we took a look at some of the projects in the past. Inspiration from KSP isn’t limited to custom control systems and layouts, however. We’ve even seen a retro-inspired port of KSP to the Apple II.