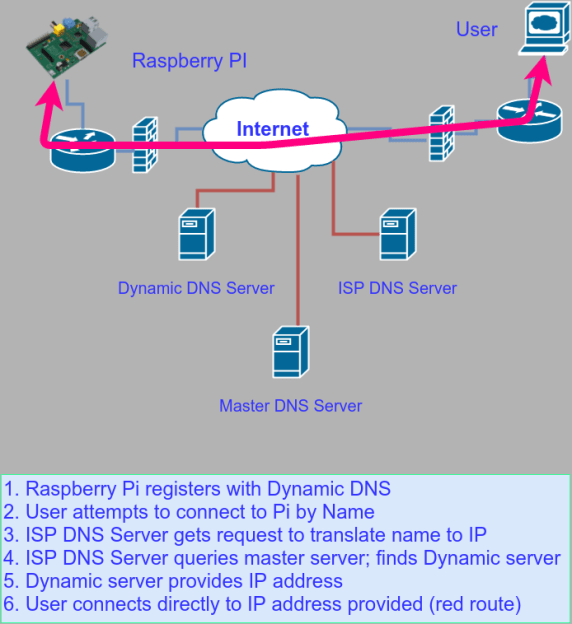 That well-known server answers DNS requests (the thing that converts hackaday.com into a real IP address). Now anyone can find your Pi. If you have a firewall in hardware and/or software (and it is a good bet that you do), you’ll also have to open the firewall port and tell the NAT router that you want to service traffic on the given port.

That’s fine if you are at home and you control all of your network access and hardware. But suppose you don’t know for sure where your system will deploy. For example, perhaps you will use your box at different traffic intersections over a 3G modem. Or maybe you have built a smart picture frame to put in a hospital or nursing home and you want access over the institution’s WiFi.

Granted, you can handle that as a system design problem. For the hypothetical picture frame, maybe it checks a web server on the public Internet periodically for new content. Sure. You can do that. Until you need to ssh into the box to make some updates. Sometimes you just need to get to the box in question.

There are a few options for cases like this. NeoRouter has software for many platforms that can create a virtual private network (VPN) that appears to be a new network interface where all the participants are local. If my desktop computer has a NeoRouter IP of 10.0.0.2 and my Pi has 10.0.0.9 then I can simply ssh over to that IP address. It doesn’t matter if the Pi is halfway around the world. The traffic will securely traverse the public Internet as though the two computers were directly connected with no firewalls or anything else between them.

Honestly, that sounds great, but I found it a little difficult to set up. It also isn’t terribly useful by itself. You need to run some kind of server like a Web server. You also need a NeoRouter server on the public Internet with an open port.

What I wound up using was a service called Pagekite. The software is all open source and there is a reasonable amount of free use on their servers. I would go on to set the whole thing up on my own servers (I’ll talk about that next time). For right now, though, assume you are happy to use their server.

If you go to the Pagekite web site, they have a really simple “flight plan” to get you started: 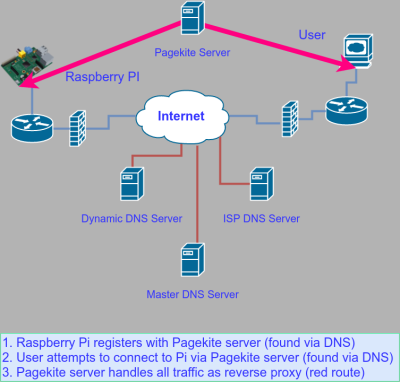 That’s it. Honestly, you don’t know these guys so I wouldn’t suggest just piping something off the Internet into my root shell. However, it is safe. To be sure I actually redirected the script from curl into a temporary file, examined it, and then ran it. You may be able to install Pagekite from your repository, but it might be an older version. They also have common packages on GitHub and repos for many package systems (like deb packages and RPM).

The concept behind PageKite is that of a reverse proxy. Both the remote computer and the user find the PageKite computer via DNS (see figure below). That server acts as a go-between and since nearly all networks will allow access to a web server, there should be no firewall issues.

The last line sets up a redirect from the specified URL to your local machine on port 80. So far that isn’t much different than using NeoRouter. However, the pagekite script is kind of interesting. It can be a backend (that is, your Raspberry Pi serving up web content), or a frontend (like the server at yourname.pagekite.me). It also has a simple web server in it. So if you wanted to serve out pages from, say /home/pi/public_html you could write:

There is a way to add things like this so they start when pagekite starts (read about the –add option). It all works and it works well.

You can redirect other ports, also. There is even a way to tunnel SSH traffic, although it does require a proxy set up for the SSH client. That will depend on what ssh programs you use. Although it is a bit of trouble, it is also handy since it allows you to SSH into the remote box even on restrictive work or school networks.

Pagekite will give you a chance to sign up the first time you run the script. However, you do need to be on a machine that can open a browser, so if you are using your Pi headless, you might want to set up the account first on another machine.

If you don’t have a public computer and you don’t have a lot of data transfer needs, the Pagekite free plan might just work for you. I didn’t want to use their domain or be subject to their quotas, so I decided to install the frontend to my own web server. The code is open source, but the documentation for making that work is not great.

Luckily, next time, I’ll take you through the steps I took to get it all working. It isn’t that hard, but it does require a little thought, text editing, and DNS dexterity.

Read more from this series:
Exposing Raspberry Pi to the Internet

42 thoughts on “Expose Your Raspberry Pi On Any Network”