Chemical compounds are formed when two or more atoms stick together. One of the ways they do this is called ionic bonding. It occurs when there is a difference in charge between the atoms, and should be familiar to the hacker as it involves a positive and negative charge. Atoms are usually neutral, with a balance of the number of negatively charged electrons and positively charged protons. However, many can easily become charged by gaining or losing one or more electrons. When this happens, the atom is known as an ion. If it’s positively charged, we call it a cation. If it’s negatively charged, we call it an anion.

Atoms in the first three groups of the periodic table tend to form cations because the have few valance electrons, making them easy to remove. A sodium cation is simply referred to as a sodium ion. No name change is needed for these groups because their charge will most always be the same as their group number.

It’s a bit different for groups 4 through 7. These atoms tend to form anions because their valence shells are nearly full. They will happily steal an electron to become isoeletronic with their nearest noble gas – the most stable state possible. When an atom becomes an anion, the letters “ide” are appended to the end. Let’s look at an example – sodium chloride.

With ionic bonding, we were dealing with losing and gaining electrons and forming ions. Atoms can also share electrons with each other. When they do this, we call it covalent bonding. Most covalent bonding occurs between non-metals, and the result is called a molecular compound.

It is very common for a pair of elements to form different binary compounds via covalent bonds. When this occurs, Greek prefixes are used to denote the number of atoms. Recall that the Greek prefixes are mono (1), di (2), tri (3), tetra (4), penta (5) and so on. So the formula CO2 would be called carbon dioxide. Traditionally, the mono prefix is left off of the first atom if there is only one. But the same rules are in play if there is more than one. For example, N205 would be called dinitrogen pentoxide.

As most of you already know, organic compounds are special. Not surprisingly, they have their own special nomenclature, which we shall cover briefly. Organic compounds are compounds that contain hydrogen and carbon. When the compound is composed solely of hydrogen and carbon, they are called hydrocarbons. The simplest of these are known as alkanes, with their name being dependent on the number of carbon atoms in the molecule. 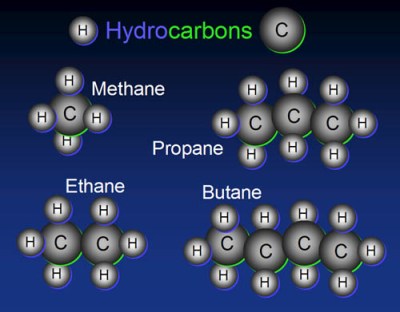 Acids are substances that produce hydrogen ions when dissolved in water. You might have noticed the example of HCl above as named hydrogen chloride. And this is correct. It is only when it is dissolved in water that it becomes hydrochloric acid.

By definition, acids need at least one ionizable hydrogen atom. To name an acid, we remove the “gen” from the hydrogen and replace the “ide” of the secondary element with “ic”. Some examples are hydrofluoric acid (HF, probably the worst acid you’re likely to encounter) and hydrobromic acid (HBr).

This article has only scratched the surface of chemical nomenclature, but should give you a good footing in the subject, and hopefully a look of understanding next time you read the ingredients of your favorite processed food.

Read more from this series:
Chemistry 101

Chemical Nomenclature
Chemical Formulas 101
See all articles in this series →