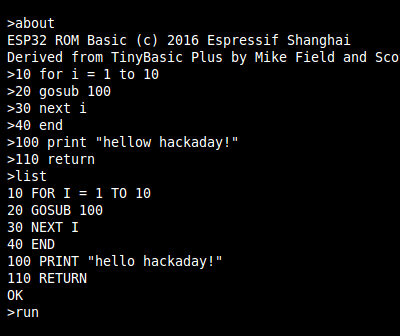 At first, we thought that the key to getting into the BASIC shell was simply blocking the onboard flash program ROM, because we discovered it by connecting to GPIO 12, labeled as the MOSI pin for “HSPI”. But a little verification with ‘scope and continuity tester verifies that no data is going across this pin at bootup, and the SPI lines for the flash aren’t even broken out from the module. It looks like whatever boot ROM the ESP32 has inside it is testing for a high voltage on GPIO 12. Don’t ask us.

Anyway, the short version of the story is: pull GPIO 12 high and hit reset. Connect to the ESP32 over serial, and hit enter to stop it from continually rebooting. Falling back to built-in command interpreter. Woot. Set your terminal program up to send only a linefeed at the end of each line and you’re off! Don’t have an ESP32 on hand to try this? I recorded a screencast of my adventures so at least you can join me for the ride.

What’s the first thing you do when faced with a command prompt? Type “help”, right? Well, that works. The ESP32 comes back with “A very Basic ROM console. Available commands/functions:” and then lists out everything you need to get started. Now, our BASIC is a bit rusty, dating from the Tandy Color Computer days, but we quickly whipped up a few demos and frankly, we had a lot of fun.

Espressif was nice enough to add iodir and ioset commands to the BASIC, and they let you set the data direction of any pin (input or output) and either read or write to it. That means blinking LEDs is just a few words away.

And there was looping and blinking. It’s easier than getting started with Arduino!

But that’s also about as far as we got. There is a print command, and an input command, but we couldn’t figure out how to handle strings, so we never got further than

There’s an rseed command, and the help lists a rnd but it looks like a syntax error when we try to use it in a function. ioget, which should read the logic voltage on a pin, doesn’t seem to work either. Going down the list, we were bummed out to find that many of the functions that we’d like to teach a young child programming just weren’t there.

BASIC Without Peek and Poke?

We couldn’t get peek and poke working for the life of us. It appears that they weren’t implemented, which is a shame because those two commands are practically the best feature of BASIC for exploring around the insides of a new chip in real-time. While you don’t often have cause for twiddling individual bits inside your desktop computer, interactively flipping those little silicon switches is a fantastic tool when dealing with a microcontroller with memory-mapped hardware peripherals.

Peek and poke are the raison d’être for BASIC. Without them, it’s just a toy language.

Late Edit: [Sprite_tm] wrote in on the BASIC. I had it all wrong. Peek and poke work! I just didn’t guess the syntax correctly. Indeed, [Sprite_tm] confirms that they did make use of them during the initial chip check-out phase. How cool is that?

The following code enables GPIO 4 as output, turns it on and then off again, and then prints out the value of the GPIOs inputs in hex. We toggled input voltage on another GPIO and watched the bits bobble. The rest is a simple matter of software.

For what any of these numbers mean, see the memory map in the technical docs (PDF). Have fun!

These Are Not The Droids…

Anyway, the big news is that the Espressif team has gotten most of the Arduino core up and working, and we have a full review coming out soon. They’re also continuing to work like crazy on development of the C libraries that real programmers will use to run these chips, so it’s probably not a top priority for them to implement peek inside an Easter egg. But we had a fun afternoon dredging up BASIC skills.