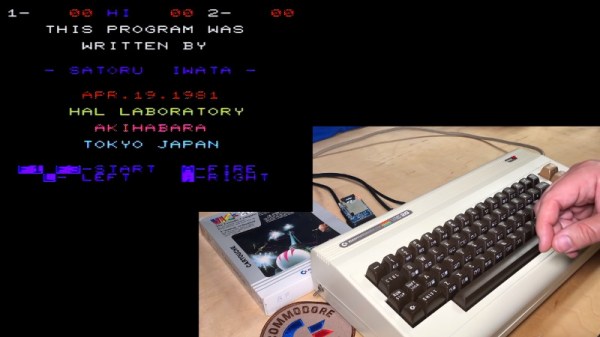 Satoru Iwata is perhaps best remembered for leading Nintendo through the development of the DS and Wii, two wildly successful systems which undeniably helped bring gaming to a wider and more mainstream audience. But decades before becoming the company’s President in 2002, he got his start in the industry as a developer working on many early console and computer games. [Robin Harbron] recently decided to dig into one of the Iwata’s earliest projects, Star Battle for the VIC-20.

It’s been known for some time that Iwata, then just 22 years old, had hidden his name and a message in the game’s source code. But [Robin] wondered if there was more to the story. Looking at the text in memory, he noticed the lines were actually null-terminated. Realizing the message was likely intended to get printed on the screen at one point during the game’s development, he started hunting for a way to trigger the nearly 40 year old Easter Egg.

As it turns out, it’s hidden behind a single flag in the code. Just change it from 0 to 1, and the game will display Iwata’s long-hidden credit screen. That proved the message was originally intended to be visible to players, but it still didn’t explain how they were supposed to trigger it during normal game play.

That’s where things really get interesting. As [Robin] gives us a guided tour through Star Battle’s inner workings, he explains that Iwata originally intended the player to hit a special combination of keys to tick over the Easter Egg’s enable flag. All of the code is still there in the commercial release of the game, but it’s been disabled. As Iwata’s life was tragically cut short in 2015 due to complications from cancer, we’ll perhaps never know the reason he commented out the code in question before the game was released. But at least we can now finally see this hidden message from one of gaming’s true luminaries.

Last time we heard from [Robin], he’d uncovered a secret C64 program hidden on a vinyl record. With his track record so far, we can’t wait to see what he digs into next. END_OF_DOCUMENT_TOKEN_TO_BE_REPLACED

END_OF_DOCUMENT_TOKEN_TO_BE_REPLACED 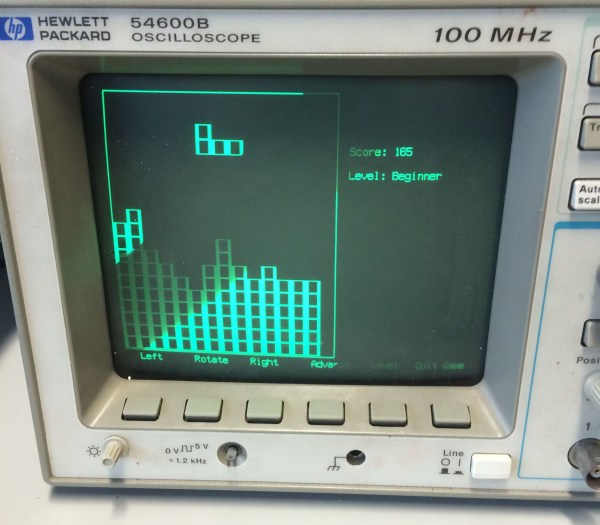 Have engineers stopped putting Easter eggs into technology lately? It’s always been a fun way to connect with your more advanced customer base (i.e. hackers) — anyway, here’s a great Easter egg you can find on the Hewlett Packard 54600B Oscilloscop — Tetris!

[RaffttaM] discovered this trick when a coworker let him know that one of the oscilloscopes in the lab had the hidden feature. A little fiddling later and a game of Tetris was revealed. If you press the Print/Utility button on the 54600B oscilloscope, followed by pressing the second and third button below the screen at the same time, you can launch the game!

Another cool embedded Easter egg is in the Game Boy Printer — If you hold the feed button during power up it spits out a Mario themed image! One of our readers even managed to hack the printer to show the Hack a Day Logo instead!

Do you know of any more modern tech with cool (and sneaky!) Easter eggs? Let us know by sending in a tip!

We had a blast with the Trinket Contest in October and November and can’t wait to see what you can come up with for this month’s competition. Microchip Technology is one of our advertisers and they offered us 20 Fubarino SD boards to give away as prizes. The challenge for you is to add our URL as an Easter Egg in your own microcontroller project. Rise to the top of our seemingly arbitrary system for picking winners and one will be delivered to your door for your future hacking pleasure.

Obviously we mean http://hackaday.com when we say URL, but what constitutes an Easter Egg? We figure it’s anything that is not apparently obvious in a piece of hardware. We built a quick example to get you thinking. Shown off in the clip after the break is a clock that displays our web address every day at 1:37pm. What did we pick that time? Because our clock displays in 24-hour time format and 13:37 is leet. See the code we used in our repo.

We thought of a few others, like making an embedded gaming that uses the Konami Code to reveal the Easter Egg, or a man-in-the-middle device that attaches to your keyboard and redirects your feeble attempts to load Facebook by closing the tab and opening Hackaday. The sky’s the limit with how creative these things can be!

What are you waiting for? Dust off those chips and get hacking!

END_OF_DOCUMENT_TOKEN_TO_BE_REPLACED