I don’t know if it is true or not today, but in fiction, spies depend on lots of high-tech gadgets. I do know that during World War II, the various secret services like the OSS and the SOE did have gadgets like secret transmitters and concealed weapons. But, like [James Bond’s] grenade-launching ink pen, to [Maxwell Smart’s] shoe phone, those gadgets came from some organized lab. (When you watch the video below, remember that at that time, a personal phone going off in a theater was unknown as cell phones were years in the future.) 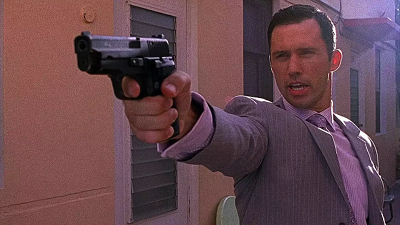 There’s a show that ran for seven seasons called Burn Notice that is decidedly different. The spy in question, [Michael Westen] (see right), has been cut out of his espionage job for some reason and is trying to figure out why using his wits and the few people who are still speaking to him. What’s interesting is that [Westen] uses a variety of gadgets ranging from a makeshift X-ray machine to a bomb made out of a microwave oven and some household products, [Westen] makes a variety of gadgets out of whatever he can find around or buy at Home Depot.

Like any fictional work, I’m not sure how many of these things would really work. Using a stun gun to zap a vacuum tube with enough high voltage to generate X-rays seems a little suspect to me. However, it is interesting that when [Westin] is modifying a cell phone to work like a bug or something, he has at least some appropriate tools (like a soldering iron) and seems to be actually doing something. He also usually explains–at least minimally–what he’s doing with some plausible explanation. He did make a cantenna that could have been right off a YouTube instructional video (see left).

This is a far cry from most spy shows where gadgets just show up with no mention of how they might really work. In fact, some shows like 24 (which is sort of a spy show) routinely give explanations so flawed that you wonder how the writers could have such a misconception (my favorite being how when someone uses a GPS to get directions to an address, the government can access the satellite to find out the address; if that makes sense to you, go read about how GPS works). Of course, real spy work is probably more writing down numbers and operating broadcast radio stations. Pretty boring stuff for [Bond], [Westen], or even [Smart].

If you include computer hacking, there are lots of hackers showing up in TV and movies (ranging from the reasonably plausible Mr. Robot to the completely far-fetched scene from NCIS you can watch below). It would be interesting to know how the general public thinks about a hardware hacker like [Westen]. He’s certainly not the stereotypical nerd hacker. Clearly, the general public has an idea now of solving problems with ad hoc technology — pioneered, perhaps, by [MacGuyver]. Granted, many of the portrayals are not too accurate, but probably no worse than the depiction of doctors or lawyers.