Nadya Peek is one of the hackers that should require no introduction for the regular Hackaday reader. She is a postdoc at the Center for Bits and Atoms at the MIT Media Lab. She’s responsible for Popfab, a CNC machine that fits in a suitcase and one of the first implementations of a Core XY stage we’ve seen. Nadya has joined the ranks of Rudolf Diesel, Nikola Tesla, Mikhail Kalashnikov, and George W.G. Ferris by having a very tiny piece of the Novena laptop bear her name. She’s built cardboard CNC machines, and taken the idea of simple, easy to build printers, routers, and drawbots worldwide.  She just defended her thesis, the gist of which is, ‘How to rapidly prototype rapid prototyping machines.’ She’s also one of this year’s Hackaday Prize judges, for which we have the utmost appreciation.

This year, the organizers of the Fab 12 conference on digital fabrication in Shenzhen turned to Nadya and her team to bring their amazing experience to conference attendees. A workshop was in order, but Nadya didn’t have time to organize the logistics. The conference organizers made a deal: the Center for Bits and Atoms would teach a workshop, but getting all the materials and electronics was the responsibility of the organizers.

Upon arriving at the Shenzhen Sheridan, Nadya found the organizers didn’t hold up their end of the bargain. The cardboard, motors, electronics, and glue were nowhere to be found. A “rider” doesn’t quite translate from English, it seems. This is Shenzhen, though, where you can buy all the cardboard, motors, electronics, and iPhone clones you could imagine. What was the solution to this problem? Founding a company in Shenzhen for eight days.

Half a tourist’s guide to Shenzhen and half a deconstruction of what goes into cardboard CNC, Nadya’s talk for the 2016 Hackaday SuperConference covers what happens when you have a week to build a company that will build machines that build machines.

Our Capabilities Are Your Possibilities

In Shenzhen, purchase orders and invoices are the domain of companies. To gather all the parts for this workshop conference, Nadya and the rest of the Bits and Atoms team founded a company, Gestalt Solutions Co. Ltd., with the motto, “Our Capabilities Are Your Possibilities”. 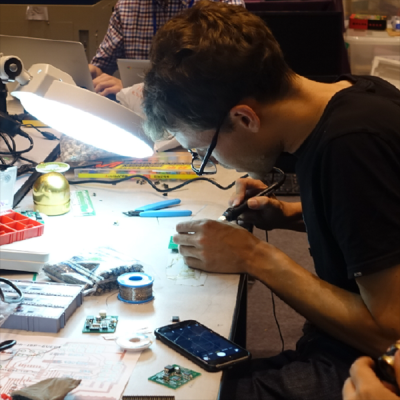 With the company name in order, the team headed down to the Huaqiangbei marketplace, where they quickly snapped up a bunch of soldering irons, a reflow oven, and about $400 worth of assembly equipment. Orders were placed for four-layer PCBs, and stainless solder paste stencils. 3D printers and laser cutters at the conference were requisitioned, and electronic components were acquired.

Despite multiple problems, the conference went off without a (visible) hitch. All this, of course, was due to being at the only place on the planet where you can buy components to build assemblies to build robots that can build robots in three days… and having the skills to pull it off.

We’re pretty keen on engineering war stories, and there were plenty of them at the Hackaday SuperConference, but Nadya’s talk goes above and beyond what we usually hear. It’s something that could only happen in Shenzhen, and we’re glad she could make it out and reminisce about the bots of days past.

17 thoughts on “Founding A Company In Shenzhen For Eight Days”