Nadya Peek is one of the hackers that should require no introduction for the regular Hackaday reader. She is a postdoc at the Center for Bits and Atoms at the MIT Media Lab. She’s responsible for Popfab, a CNC machine that fits in a suitcase and one of the first implementations of a Core XY stage we’ve seen. Nadya has joined the ranks of Rudolf Diesel, Nikola Tesla, Mikhail Kalashnikov, and George W.G. Ferris by having a very tiny piece of the Novena laptop bear her name. She’s built cardboard CNC machines, and taken the idea of simple, easy to build printers, routers, and drawbots worldwide.  She just defended her thesis, the gist of which is, ‘How to rapidly prototype rapid prototyping machines.’ She’s also one of this year’s Hackaday Prize judges, for which we have the utmost appreciation.

This year, the organizers of the Fab 12 conference on digital fabrication in Shenzhen turned to Nadya and her team to bring their amazing experience to conference attendees. A workshop was in order, but Nadya didn’t have time to organize the logistics. The conference organizers made a deal: the Center for Bits and Atoms would teach a workshop, but getting all the materials and electronics was the responsibility of the organizers.

Upon arriving at the Shenzhen Sheridan, Nadya found the organizers didn’t hold up their end of the bargain. The cardboard, motors, electronics, and glue were nowhere to be found. A “rider” doesn’t quite translate from English, it seems. This is Shenzhen, though, where you can buy all the cardboard, motors, electronics, and iPhone clones you could imagine. What was the solution to this problem? Founding a company in Shenzhen for eight days.

Half a tourist’s guide to Shenzhen and half a deconstruction of what goes into cardboard CNC, Nadya’s talk for the 2016 Hackaday SuperConference covers what happens when you have a week to build a company that will build machines that build machines.

END_OF_DOCUMENT_TOKEN_TO_BE_REPLACED 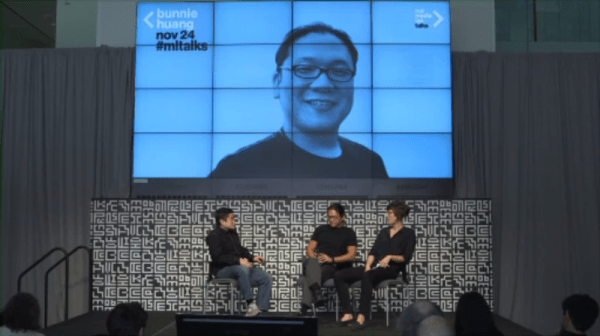 We follow [bunnie]’s blog as he posts interesting and usable information quite regularly. [bunnie] posted about a video of a recent talk he did at MIT Media Lab with Nadya Peek and Joi Ito. This was in lieu of his monthly “name that ware” competition, which is worth looking into as well.

The talk is focused on small volume manufacturing and the experiences that the speakers have under their collective belt is large enough that the conversation takes a turn from how to do things in practice, to the theory and technique of manufacturing on a philosophical level.

[bunnie] prefaces the conversation with an explanation of some of the design and manufacturing processes involved when working on the circuit stickers project. He talks about the importance of testing the product and the complex test jig that is required to quality check a simple (in comparison to the test jig) product. [bunnie] shares an overview of the project timeline and where some extended design stages might be found in unexpected places.

The design and manufacturing process is discussed on many levels throughout the talk. Among the points that are insightful, we certainly found ourselves a little jelly of all the time [bunnie] gets to spend in Shenzhen.

If you’re not familiar with [bunnie]’s blog you can check it out at www.bunniestudios.com. Pro Tip: you can spend the better part of your workday browsing topics in the sidebar on the right.

We have covered the MIT Media Lab before, including a trip to Shenzhen that is discussed in the Media Lab talk by [Joi] and [bunnie]. Another interesting interview at SXSW earlier this year by [Sophi Kravitz] who spoke with [Sunanda Sharma] about mediated matter. 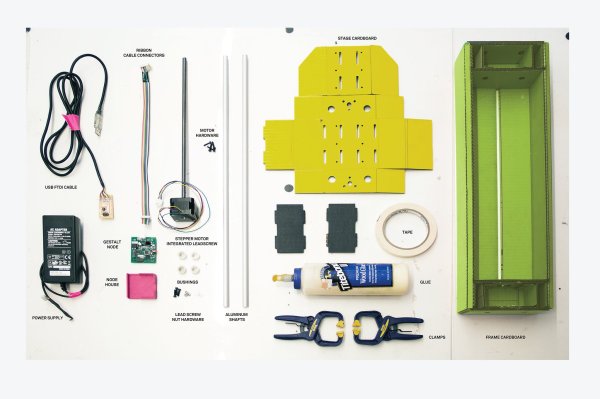 Want to build up a desktop CNC machine without breaking your pocketbook? [James Coleman], [Nadya Peek], and [Ilan Moyer] of MIT Media Labs have cooked up a modular cardboard CNC that gives you the backbone from which you can design your own machine.

The CNC build comprises of design instructions for a single axis linear stage and single axis rotary stage with several ideas on how to combine multiple of these axes together to construct a particular machine. Whether your milling wood, laser-engraving your desk, or pipetting your bacteria samples, the designs [Dropbox] and physical components can be adopted for your end-application.

Perhaps the most interesting aspect of this project is that, at the high level, it is not just a cnc, but a framework known as Gestalt. This architecture enables users to develop their own machine configuration consisting of multiple software nodes linked together with high-level Python Code. Most of the high level computation is organized by a Python library that calls compiled C-code. This high-level framework processes instructions through the desired machine’s kinematics to output commands to the motor controllers. Finally, the top-level interface does away with the archaic GCode with two alternatives: a Python interface consisting of function calls to procedures and a remote interface to make procedure calls through http requests. While the downside of a motion control language is that commands have no standardization; they are, however, far more human-readable, a benefit that plays into the Gestalt Framework’s aim “to be accessible to individuals for personal use.”

In the paper [PDF], [Ilan] expresses the notion of a tool as an impedance-matching device, an instrument that extends the reach of our creativity to bend and morph a broader range of shapes into forms from our imagination. Where our hands fail in their imprecision and weakness, tools bridge this gap. Gestalt and the Cardboard CNC are first steps to creating a framework so that anyone can design and realize their own impedance-matching device, whether they’re weaving steel cables or carving wood.

The folks at MIT Media Labs a familiar heavy-hitters in this field of low-cost machinery, especially the kind that fit in a suitcase. We’re thrilled to see a build that reaches out directly to the community.