Noodle Feet is a robot — an artistically designed robot — that is a character from Sarah Petkus’ webcomic Gravity Road. This webcomic explores a post-human universe inhabited by robots, and dives deep into these robots’ exploration of the trash left behind from a human civilization.

Sarah’s not just drawing these robots. She’s bringing them to life. The character Noodle Feet, so named because his legs are encased in pool noodles, has been made real with an aluminum skeleton, a PCB brain, and infrared detecting eyes. At the 2016 Hackaday SuperConference Sarah gave a talk on the challenges of making this robot real and the specifics of making her robot dig its toes into carpet, slobber all over the floor, and taste with its artificial tongue.

Since last year’s talk on Noodle Feet, Sarah has vastly improved the gripping strength of her noodle’s feet. Over the last two years of construction the mechanism to extend grippy, cat-like toenails has moved from cheap hobby servos to solenoids to a clever cam system. While these toe feet worked, the grip was never quite right, and the world isn’t completely covered in shag carpet. After the break we’ll take a closer look at the improvements that Sarah made to the design and how she came up with the ideas for each new iteration.

The design for these toes changed after Sarah visited JPL and saw the inspiration for these gripping toes, a robot designed to crawl on asteroids and the ceilings of Martian lava tubes. Here, the answer to Noodle Feet’s lack of grip was simple – just add more toes. 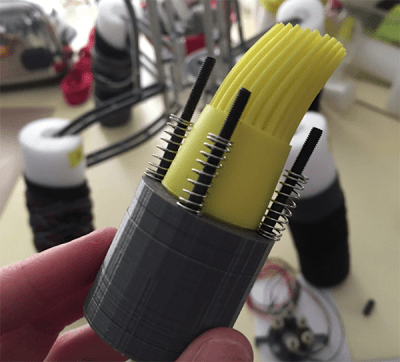 But last year’s implementation of Noodle Feet wasn’t feature complete. One thing Sarah really wanted in the noodle feet was a tongue, equally capable of tasting human companions and leaving a snail trail of wetness in its wake. A tongue is a highly unorthodox robotic accessory, but Sarah came up with something that almost works, and does it while looking the part.

The design of Noodle Feet’s tongue is now centered around a silicone basting brush, commonly found everywhere from the local Dollar Store to Bed Bath and Beyond. This basting brush consists of fine silicone hairs attached to a container designed to dispense barbecue sauce. It’s simple, and it almost looks like a tongue, to boot.

Of course, Noodle Feet isn’t the only robot Sarah has been working on. She’s already built a judgmental toaster and is pretty far along in building a balancing pink flamingo. All of this is amazing work, and even though judgmental toasters, wet noodle feet, and autonomous lawn flamingos aren’t actually useful, they are fantastic art pieces that push the boundaries of what an artistic robot can be.