Stick in the Mud

Many tall buildings in this area rest on foundation systems that extend all the way down to bedrock, on what are called end-bearing piles. But due to the geology of the Millennium Tower’s site, end-bearing piles would have reached down over 200 feet before hitting competent rock. Instead, the geotechnical engineers chose to support the tower on a series of 950 precast concrete friction piles driven between 60 and 90 feet into the soft clays below. A 10 foot thick concrete mat was then built across the tops of these piles to serve as a solid base for the tower’s superstructure.

While an end-bearing pile transmits loads directly into bedrock, a friction pile transfers loads through friction into layers of softer soil. When a pile is driven or drilled into clay or sand, the soil presses against the newly introduced member. The friction at the pile-soil interface causes the pile to resist being pushed down further or being pulled out. If you’ve ever hammered a tent stake in place, then you’ve essentially driven a tiny friction pile: the stake isn’t sitting on bedrock, but it can resist vertical loads (in compression or tension) and lateral loads all the same.

However, this kind of foundation system relies on the stiffness of relatively weak clay, meaning that the building will most likely undergo some settlement. This process typically occurs in three broad stages: In the first stage of settlement, the soil deflects elastically, squishing as a result of the new compressive forces that have been applied to it. The second stage is called primary consolidation, wherein all the excess water in the clay is forced out, resulting in a decrease in the volume of the clay and a further settlement of the building. In the final stage, called secondary consolidation, soil particles within the clay layer reorganize themselves to adjust to the newly dry, highly compressed state. This leads to a further reduction in volume and even more settlement. Any current movement at Millennium Tower is probably due to primary or secondary consolidation.

Some degree of settlement is acceptable for a new building, and the geotechnical engineer typically provides an accurate calculation for anticipated movement well in advance of construction. However, Millennium Tower has already sunk over three times more than its total anticipated settlement. Also, since primary and secondary consolidation and can take years, it’s hard to know exactly when the tower will stop sinking.

The other issue is that of differential settlement, when one side of the building sinks more than the other, leading to the kind of tilt we’re now seeing in Millennium Tower. Differential settlement can occur when a building imposes uneven stresses onto the soil, or when the soil itself is weaker on one side. (The most famous leaning tower is the campanile of Pisa, but unsung examples like the Tower of Suurhusen and Oude Kerk in Delft are worthy of mention as well.) Differential settlement can lead to unanticipated structural stresses, damage to architectural finishes, leaks at connections to water and sewer lines, and problems with high speed elevators.

Millennium Tower is an unusually heavy building for this area of the city and for this type of foundation, and its weight problem is mostly due to the developer’s choice to build with concrete rather than with steel. (Concrete is often preferred for residential construction because the thin, flat floor slabs allow a developer to squeeze more rentable floors into a limited height.) Although steel has a higher unit weight than concrete (490lb/ft³ for steel, compared to 145 lb/ft³ for concrete), steel buildings tend to be lighter because much less of the material is necessary. As a point of comparison, the recently built 33-story steel office tower at 555 Mission Street applies a soil pressure of 2.4 ksf (2,400 pounds per square foot) whereas the 58-story Millennium Tower weighs in at a corpulent 11.4 ksf. The additional weight has probably caused the soft clays to settle more than for neighboring towers.

For its part, Millennium Partners blames the Transbay Joint Powers Authority (TJPA), the agency that has been excavating the Transbay Transit Center just feet from the tower’s footprint. Millennium claims that the soil dewatering operations for the new train station have accelerated the settlement of its skyscraper. The TJPA’s damning response states that the Millennium Tower was already sinking badly before the Transit Center began excavation, that no other nearby towers experienced settlement due to its construction, and that the tower’s extreme settlement is due only to its excessive weight and inadequate foundation.

How to Fix It?

Differential settlement can be a source of unanticipated structural stresses, but Millennium Tower does not seem to be in trouble at the moment. An engineering review has shown that the effect of the settlement is “negligible” and that the building would almost certainly be able to resist extreme earthquake loads. Journalists have reported a range of conflicting values for the true measure of the building’s tilt, but its out-of-plumbness doesn’t appear to be visible to the naked eye. 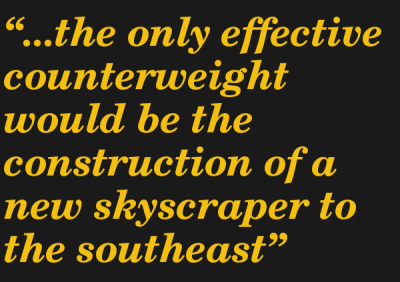 The clearest solution for the Millennium Tower’s foundation issues (without demolishing the building and starting over) would be to inject a cementitious grout into the weak clay beneath the foundation. This would strengthen the soil and halt the settlement, but the costs would mostly likely be prohibitive. Alternatively, the owners could stop the building from listing further by placing a massive counterweight on the opposite side of the tilt. When the Leaning Tower of Pisa’s tilt became worrisome, conservators placed a heap of lead weights on the high side to keep the tower in place during stabilization. Unfortunately, Millennium Tower is so large and heavy that the only effective counterweight would be the construction of a new skyscraper (with friction piles, of course) to the southeast.

The reasonable solution to Millennium Tower’s sinking and tilting is the least intrusive and most cost effective: Do nothing and keep an eye on it. Cracked stone should be replaced and elevators should be monitored for excessive wear, but a major structural rehabilitation does not yet seem necessary or worth the cost. As long as the tower is habitable and doesn’t show major signs of distress, the best thing to do is to watch and wait.

87 thoughts on “Millennium Tower Is Sinking; And Waiting Is The Hardest Part”