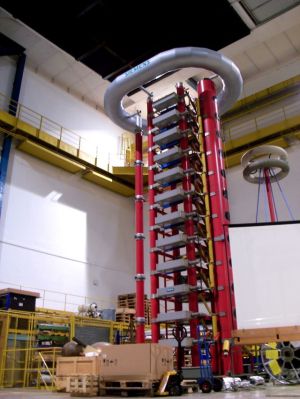 Another device that uses capacitors for high power pulses is the Marx generator. It is a very simple circuit that allows you to charge a number of capacitors in parallel and then suddenly discharge them in series using spark gaps. Very large Marx generators have been built, for high voltage component testing and other purposes, but it’s also very easy to make a small lightning simulator in under an hour if you have some high voltage capacitors and resistors. Marx generators are in use in the Z machine, a Sandia National Labs project for fusion research, that is capable of shooting 26 million amperes in 95 nanoseconds. Temperatures of 3.7 billion kelvins have been obtained.

The Marx generator is a particular case of a pulse forming network, or PFN. Capacitors, inductors and transmission lines, or a combination of them are used for energy storage in various topologies. Then, the network is discharged into the load via a high voltage switch

such as a spark gap or a thyratron. The transmission line PFN is interesting because the capacitance of the conductors in the line is used for both transmission and energy storage. When the power supply is connected it slowly charges up the capacitance of the line through RS. When the switch is closed, a voltage equal to V/2 is applied to the load, the charge stored in the line begins to discharge through the load a current of V/2Z0 and a voltage step travels up the line toward the source.

Compulsators (a portmanteau for compensated pulsed alternator) are another way of delivering high current pulses. They convert rotational energy from a flywheel directly into electrical energy. The compulsator works in a similar way as a normal alternator, but is designed with minimal inductance windings to deliver extremely high currents in very short time periods. There is little information on compulsator design and, as far as we know, no hobbyist has ever made one. You have your homework assignment.

The explosively pumped flux compression generator, or EPFCG for short, is a device that generates a high power electromagnetic pulse using a high explosive to compress the magnetic flux. Million of amperes and tens of terawatts of power are produced by the EPFCG in a single pulse, since the device is destroyed in operation.

The three basic steps in flux compression are shown above.

The compression process allows the chemical energy of the explosives to be (partially) transformed into the energy of an intense magnetic field surrounded by a correspondingly large electric current. There are several designs of EPFCG’s. The figure shows the hollow tube type.

Pulsed power is also used in particle accelerators and high power lasers and the technology is rapidly evolving.

If you’re starting out, you may want to experiment with capacitor banks which are a relatively simple way of obtaining pulsed power. But if you do, take all necessary precautions. The power levels can be extremely dangerous.

41 thoughts on “Pulsed Power And Its Applications”