As a Hackaday writer, you can never predict where the comments of your posts will go. Some posts seem to be ignored, while others have a good steady stream of useful feedback. But sometimes the comment threads just explode, heading off into seemingly uncharted territory only tangentially related to the original post.

Such was the case with [Steven Dufresne]’s recent post about decimal time, where the comments quickly became a heated debate about the relative merits of metric and imperial units. As I read the thread, I recalled any of the numerous and similarly tangential comments on various reddit threads bashing the imperial system, and decided that enough was enough. I find the hate for the imperial system largely unfounded, and so I want to rise to its defense.

What is a system of units anyway? At its heart, is just a way to measure the world. I could very easily measure the length and width of a room using my feet, toe to heel. Most of us have probably done just that at some point, and despite the inconvenient and potentially painful problem of dealing with fractionalization of your lower appendage, it’s a totally valid if somewhat imprecise method. You could easily pace out the length of the room and replicate that measurement to cut a piece of carpet, for instance. It’s not even that much of a stretch to got to the home center and buy carpet off the roll using your personal units — you might get some strange looks, but you’ll have your personal measuring stick right with you.

The trouble comes when you try to relate your units to someone not in possession of your feet. Try to order carpet online and you’ll run into trouble. So above and beyond simply giving us the tools to measure the world, systems of units need to be standardized so that everyone is measuring the same thing. Expanding trade beyond the dominion where one could refer to the length of the king’s arm and have that make sense to the other party was a big driver of the imperial system first, and then the metric system. And it appears to be one of the big beefs people have regarding the United States’ stubborn insistence on sticking with our feet, gallons, and bushels.

How Ridiculous are We Talking? 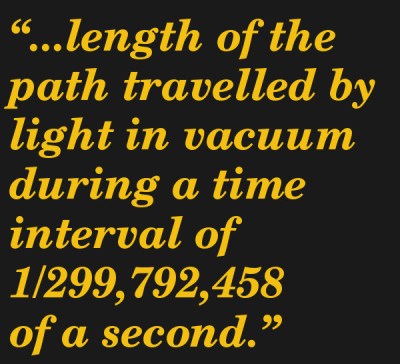 The argument that imperial units are based on ridiculous things like the aforementioned king’s arm? That’s not an argument when a meter was originally defined as one 10-millionth of the distance from the north pole to the equator. Even rigorously defined relative to the speed of light or the wavelength of krypton-86 emissions in a vacuum, the meter is based on phenomena that are completely inaccessible to the people who will use is, and unrelated to their daily lives. At least everyone has seen a foot that’s about a foot long.

Doing the conversions between imperial units and SI units is tedious and error prone, they say. Really? Perhaps I’d buy that argument a hundred years ago, or even fifty. But with pervasive technology that can handle millions of mathematical operations a second, there’s not much meat on that bone. I’ll grant you that it’s an extra step that wouldn’t be needed if everyone were on the same system, and that it could lead to rounding errors that would add up to quite a bit of money over lots of transactions. But even then, why is that not seen as an opportunity? Look at financial markets — billions are made every day on the “slop” in currency exchanges. I find it unlikely that someone hasn’t found a way to make money off unit conversions too.

Another point of contention I often see is that imperial units make no sense. Yes, it’s true that we have funny units like gills and hogshead and rods and chains. But so what? Most of the imperial system boils down to a few commonly used units, like feet and gallons and pounds, while the odder units that once supported specialized trades — surveyors had their rods and chains, apothecaries had their drams and grains — are largely deprecated from daily life now.

For the units that remain in common use, the complaint I hear frequently is, “Why should I be forced to remember that there are 5,280 feet in a statute mile? And why is there a different nautical mile? Why are there 12 inches in a foot anyway? A gallon has four quarts, why does that make sense?” And so on. My snappy retort to that is, again, “So what?” If you’re not a daily user of the imperial system, then don’t bother yourself with it. Stick to metric — we don’t care.

If you’re metrified and you’re forced to use imperial units for some reason, then do what a lot of us imperials have to do — deal with it. I’m a scientist by training, and therefore completely comfortable with the SI system. When I did bench work I had to sling around grams, liters, and meters daily. And when I drove home I saw (and largely obeyed) the speed limit signs posted in miles per hour. No problems, no awkward roadside conversations with a police officer explaining that I was still thinking in metric and thought that the 88 on my speedometer was really in km/h and I was really doing 55. If I stopped at the store to pick up a gallon of milk and a couple of pounds of ground beef for dinner, I wasn’t confused, even if I slipped a 2-liter bottle of soda into the order.

At the end of the day, I don’t really see what all the fuss is about. Imperial and metric both have their place, and each system seems to be doing its job just fine. If your argument is that imperial units are inelegant and awkward, even though you’re correct I don’t think that’s enough to sway the imperial holdouts. And if you’re just upset because we’re being stubborn and won’t join the enlightened metric masses, then I think you’re probably going to be upset for a long time to come.

899 thoughts on “What’s So Bad About The Imperial System Anyway?”