The ‘Pola’ in the PolaPi is a giveaway for what this Hackaday.io project is. This polaroid-like camera, created by [Muth], is a sort of black and white, blast from the past mixed with modern 3D printing. It is based on a Raspberry-pi Zero with a camera module, a Sharp memory LCD for viewing the image, and a Nano thermal printer to print the actual photo. Throw in some buttons, a battery and a slick 3D printed case and you have your own PolaPi. 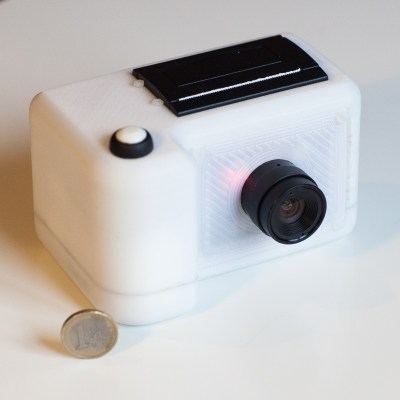 Right now it’s already on the second iteration as [Muth]s gave the first prototype to some lucky person. As he had to rebuild the whole camera from scratch, he took advantage of what he learned in the first prototype and improved on it. The camera has a ‘live’ 20fps rate on the LCD and you can take your photo, review it, and if you like the shot, print it. The printed photo is surprisingly good, check it out in the video after the break.

Currently the software is being actively developed and the latest version has, among other things, a slit-scan mode. For those who don’t know, slit-scan photography is a technique that can create some crazy warped and psychedelic effects (in this case, as psychedelic as a black and white photo can be).

We know you want one for yourself. If you don’t want to spend the time installing and configuring your RPi Zero, [Muth] kindly shared an SD card image with everything ready.

It’s not the first camera of this kind we covered here, we covered at least two in the past, but this one sure looks nice!