The decibel can trace its roots back to the old phone system. Originally, the unit used to measure loss in telephone and telegraph cables was “miles of standard cable” (MSC). There was an elaborate definition of what a standard cable was and 1 MSC was the amount of loss of a predefined signal over a mile of this cable. This went on until 1924. 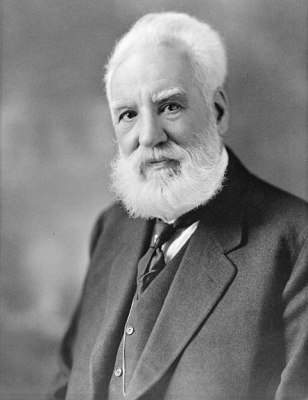 That was the year Bell telephone introduced the Transmission Unit (TU) which was later (in 1928) called a bel, to honor Alexander Graham Bell (the chap on the left). We don’t know what happened to the last L in Bell’s name. It caught on, and we still use it today to measure gain and loss (loss shows up as a negative number).

Notice how losses show up as negative decibels? You may wonder, though, what does it mean to have an antenna with 3 dB gain? By the formula, that means the output of the antenna is 3 dB (right around twice) the input. However, it is difficult (and perhaps not too useful) to measure the power output since it isn’t really a two terminal device. Instead, antennas are measured by their gain over an isotropic antenna (an unbuildable antenna that is a single point in space that radiates the input power evenly in all directions). Of course, that’s not really practical, so sometimes you measure the gain over a dipole’s antenna’s peak gain. To avoid confusion, you almost always see an antenna gain written as 3 dBi (for isotropic) or 3 dBd (for dipole). The dBd number is always 2.15 dB less than the dBi number.

Another thing to consider when thinking about antennas is direction. For example, a dipole’s gain is 1.64:1 (2.15 dBi) peak. But in some directions, it is much less. You can see the radiation pattern for a dipole in the figure to the right. An isotropic pattern would be a perfect sphere.

If your math is a bit rusty, you might want a quick review of logarithms.

For decibels, you’ll need base 10 logarithms so that’s all we’ll talk about. Consider the number 100:

Logarithms are handy when you have a large range of numbers because it compresses things. There are also some handy math facts that you’ll need to know if you want to do more than just memorize the decibel formula. Adding two logs is like multiplying the two original numbers and taking the log:

By the way, this is how slide rules (like the ones below) work.

What’s even more important, is how easy it is to raise a number to a power using logarithms. Suppose you want to find 20 to the 9th power (written as 20^9). You could multiply 20 by itself, of course. But you can also find the answer by taking the log of 20 (about 1.3) and multiplying by 9. The answer will be the same as log (20^9).

You’ll see that the formula used for decibels will sometimes use a factor of 10x (converting bels to decibels) and sometimes 20x (a combination of the 10x and squaring the ratio). Why? Remember that the bel is a measure power ratio. If you just want to remember a rule of thumb, the formula (see below) with the 10 in it is for power and the one with 20 in it is for voltage or current ratios. Why? Keep reading.

In simple terms, then, a bel is just the logarithm of the ratio of output power to input power. So if you put in 1 watt and get out 10 watts, that’s a gain of 10X and that’s 1 bel. But like I said, no one uses bels, so multiply the answer by 10 to get decibels (10dB).

That’s all there is to know, right? Not quite. There are two other things to think about. First, what if you are measuring voltage instead of power? The decibel is a power measurement, but you know that power is proportional to voltage squared. So if you take the voltage ratio, you have to multiply the computed value by 2 because multiplying the value by 2 is like squaring the ratio and then taking the log. Since you still have to multiply by 10, the result is you multiply your bel value by 20 instead of 10 if it is refering to a voltage or current ratio..

However, there is one more catch: many times you hear a dB measurement applied to a single value. How can you measure one value and get a ratio? The answer is: you can’t. When you see a single value that appears in dB it means there is an assumed reference value. Sometimes this is made explicit and sometimes it is just implied. For example, if you see a measurement of 5 dBm, this means the measurement is relative to 1 milliwatt. In audio work, you may encounter the dBu or dBv which is relative to .775 VRMS. That’s the voltage that delivers roughly a milliwatt into a 600 ohm load.

If you only take away two things from this about decibels, let it be these two:

If you keep those in mind, decibels are pretty easy to handle.

These days you can do some pretty complicated things with integrated circuits. It is easy to lose sight of the basics given all this complexity. While the decibel isn’t going to allow you to build anything new, it is useful to understand how it works for everything from filter insertion loss to attenuation in fiber optics (usually represented by dB/m or decibels per meter).

There are many other basic topics that you may gloss over these days or perhaps forgot from some long-ago class. Sometimes it is worthwhile to go read a fundamental book. Or revisit control theory. Either way, going back over old ground with more experience often gives you some new insights.

20 thoughts on “Saved By The Bel — Understanding Decibels”