Of Modes and Modulations

Hams speak in terms of modes and modulations when describing their radio transmissions. The difference between the two terms is mostly not important to our discussion, though, and in practice a lot of hams use the terms interchangeably. But for completeness, modulation is a way of impressing information on a radio wave, and a mode is a way of using a modulation to communicate. Modulation schemes include amplitude modulation (AM), frequency modulation (FM), and single sideband modulation (SSB). Modes include continuous wave (CW), analog voice, digital voice, images, and data. 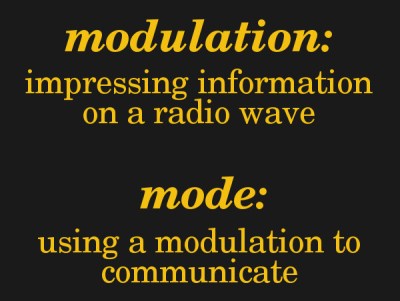 The digital modes I want to discuss are the ones where you can easily sit down at a keyboard and have your message appear magically on another ham’s terminal across the world. I’m not going to cover CW as a data mode here, even though it clearly was the first and is arguably the most successful digital data mode ever. International Morse Code has been going strong for 140 years, and with the many advantages of CW modulation it’s likely to remain a powerful tool for as long as people care to learn their dits and dahs.  Yes, there are applications that will translate keystrokes to Morse and back, but that just feels like cheating.

Those of us with long enough memories will recall the early days of the interwebz, when dial-up connections were the only way to get online. The sound of a modem dialing Compuserve or AOL and negotiating a connection was the soundtrack of the pre-Internet days. The modem was modulating the data signals from your computer into audio tones that would fit down the analog phone line, and demodulating the returning audio signals. All ham radio data modes basically boil down to this same process — with the addition of a little outboard equipment, data from your computer is turned into audio tones that are fed to your transmitter, and audio from your receiver is decoded back into data.

In a lot of cases, the extra equipment required to tap into most data modes these days is minimal. There was a time when special converters were needed, but with a powerful DSP built into every computer sound card, pretty much any PC will do. Many ham transceivers now have sound cards built in, too, so sometimes all you need is a USB cable and the right software. FL-Digi is a popular package that supports most of the popular digital modes, provides a waterfall display that lets you easily visualize a huge swath of bands, and even controls your rig, tuning it to the selected frequency and keying the transmitter when needed.

There is a bewildering number of data modes out there, and cruising through the HF bands at night can sound a little spooky. The warbling tones that seem to drift across the bands as the ionosphere does its nightly dance are a little eerie. The audio signature of each data mode is pretty distinctive, and experienced practitioners can pick out the mode just by the sound, or maybe with a little help from its appearance on the waterfall display. Noobs can get help with identifying the modes from any number of websites, or can rely on their software package to autodetect the mode.

Which mode to choose is largely a function of what is going to work best under the given conditions. Unlike modems connected by a telephone line, the physical medium in ham data modes is subject to a lot more potential for interference, both natural and man-made. Signals can be interrupted by crashes of static from electrical storms, two signals can arrive by different paths and suffer phasing problems, or the signal strength can be so low as to be barely above the noise floor. Any useful data mode has to take these vagaries into account, and some do a better job of dealing with one set of conditions than another.

Here’s a run-down of the major data modes you’ll run across and the relative benefits of each:

Radioteletype, or “ritty” as hams call it, is the original digital data mode. It dates back almost as far as commercial radio does, with the first RTTY service established between San Francisco and Honolulu in 1932. Then as now, RTTY uses the 5-bit Baudot code to encode each character. The simplest modulation scheme for RTTY is audio frequency-shift keying (ASFK) with a 170Hz difference between the mark and the space bits. This results in a whopping 45-baud connection (you’ll notice that most ham digital modes tend to be on the low side with regard to throughput thanks to the limited bandwidths available at the relatively low frequencies needed to take advantage of the ionospheric skip needed for long-distance contacts.) As slow as it sounds, that’s still about 60 words per minute, which is plenty fast enough to keep up with most typists. 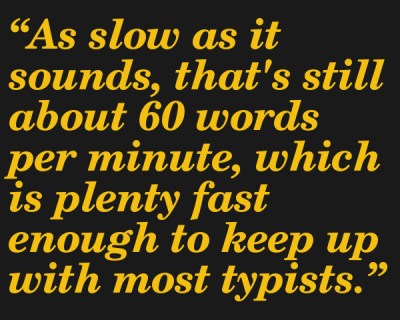 RTTY has been joined by a raft of other data modes, but there are still RTTY aficionados out there plying the airwaves. The lower end of the 20-meter band is a good place to find RTTY operators.

One of RTTY’s advantages is that it’s technically easy to implement. But it doesn’t perform particularly well at very weak signal levels. To fix that, [Peter Martinez (G3PLX)] decided to come up with a better RTTY. In 1998, PSK31 was introduced, and it has become quite popular since then.

[Martinez] took a two-pronged approach: first, he developed a new encoding method for alphanumeric characters, called Varicode. Instead of a fixed word length like the Baudot used in RTTY, Varicode’s word-length was more Morse-like, with frequently used letters represented by shorter codes than rarer letters. Then, to modulate the code, [Martinez] leveraged the DSP in a computer’s sound card to shift the phase of an audio signal by 180° to represent a zero in the Varicode, while unshifted audio represented a logical one.

This phase-shift keying (PSK) results in a bit rate of 31 – slower than RTTY, but designed to keep up with the average typist. PSK31 is more efficient than RTTY in terms of bandwidth — only 31Hz wide — and coupled with the fact that receiver and transmitter have to be synchronized and the DSP algorithm lends itself to predicting when to expect the phase transitions that signal data being transmitted, PSK31 excels at pulling data from weak signals.

The user experience for RTTY and PSK31 is pretty simple — the sending party types a terse, abbreviation-rich message on a keyboard, and the receiving party reads the message on some sort of alphanumeric display. But lest you think that Amateur data modes are just for sending straight text messages like those that were sent by Model 33 teletype terminals back in the day, there are plenty of packet modes for sending more complex messages, including email.

PACTOR is a set of modes that are based on frequency-shift keying (FSK) with a 200Hz shift. Unlike RTTY and PSK31, PACTOR encodes data as 96- or 192-bit packets, which allows the use of the Automatic Repeat Request (ARQ) error control protocol to request packets that fail a CRC to be resent. PACTOR clocks in at around 200 baud.

Unfortunately, PACTOR requires an expensive piece of equipment called a terminal node controller (TNC) between the radio and the computer. To remedy this, the WINMOR protocol was developed. Similar to PACTOR in that it’s a packet mode with error correction, WINMOR does away with the TNC by using an inexpensive USB audio link, or by leveraging the sound card built into many modern transceivers.

Both WINMOR and PACTOR are gateway protocols to the Winlink 2000 network that provides email service via HF radio. Winlink is an extremely diverse hybrid network of HF and VHF radio links into internet-coupled message servers. Emails can be composed with the full-featured RMS Express client that looks and feels pretty much like any other email client. Emails can include attachments and can be sent peer-to-peer or through the network to any other Winlink user.

As useful as the Winlink network is — it has been a huge boon to emergency communications in natural and man-made disasters where local internet service is disrupted — using it is about as exciting as sending an email, because that’s exactly what you’re doing. For my money, digging a one-to-one contact out of the noise with a couple of watts on PSK31 sounds like a lot more fun. I’m glad the Winlink network is there, and it pays to practice with it from time to time, but there are a lot more challenging data modes to explore, at least in my opinion.

I’ve only scratched the surface of the digital modes available to the mic-shy ham. Here’s hoping this gets a few more new people into the hobby, or maybe even gets those licensed but largely inactive hams on the air. After all, we all need more people to not talk to.

66 thoughts on “Shut Up And Say Something: Amateur Radio Digital Modes”