Oh, for cryin’ out loud. That’s the last straw. We’ve seen one dangerous YouTube video too many. Are we honestly cursed with a false feedback system that unequitably rewards dangerous behavior in online videos? Obviously the answer is ‘yes’. Now the real question becomes, can we do anything about it?

Professional Driver on a Closed Course

Marketing is all about putting something in front of a consumer and getting their brain to go “awesome!”. The fast, loud, shiny, burny, and sharp things are all on the table for that task. It’s the primal part of your brain that gives you jolt, as if your amygdala forgot how to run from sabertooths (saberteeth?) and learned how to like and subscribe. 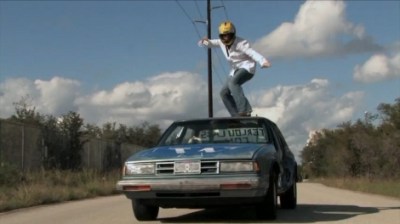 Back in the day, people were hurt and even killed when replicating stunts they saw done on television. To protect from litigation, companies started adding disclaimers — Don’t Try this at Home or my favorite: Professional Driver on a Closed Course.

But the thing is, commercials are big business. If someone gets hurt, there’s money to be had by assigning blame in a court of law. When the ability to produce and distribute video content was democratized by the coming of the Internet we lost those warnings and the common sense that went with them.

Going way back to this remote-control-a-real-car hack in 2009 I haven’t been able to shake the lack of consideration for danger in a project like this. I included it in the title, which ends with “(dangerously)”. While I wasn’t taken to task in the comments for that title, I have been chided for advocating for things as controversial as helmets when strapping your body to a moving object. Do a Ctrl-F on “helmet” in this article to see what I mean.

The people pulling off these hacks were doing it because it felt awesome and they wanted to document how that felt. They weren’t stars, they were hackers and the world mostly ignored them except in places like Hackaday. We might debate the lack of safety measures but most assumed anyone with skills to do this would take a beat to consider the risks. This was probably a false assumption.

It’s All About the Subs

Things have gotten worse since then. I can’t blame all of this on YouTube, but I’m going to try. One day, YouTube changed everything. They put together a perfect mix of easy uploading, great discoverability, and (most importantly) advertising revenue sharing. For some people, this became a business and not just a way to connect with the rest of the hacker community.

This is the rise of the subscriber base. It’s a vicious cycle — you need more people to like and subscribe so that their influence will push your channel to more people to like and subscribe. The problem is, the fastest way to this is that tricky amygdala again. For some, this is being funny, but for others this is speed, fireballs, and loud bangs, with no regard for life, limb, or eyeball.

I like fireballs and fast cars as much as the next person. And we’ve certainly run a lot of articles on the escalatingly dangerous hacks out there for all to see. For instance, we’ve covered several hacks from [kreosan], like microwaving things outside of a microwave and then building a microwave gun.

But even the more mainstream content appears to be getting more and more dangerous. Our beloved [Colin Furze] is guilty of dangerous behavior. Not only did he burn himself testing a jet engine out without any safety gear, but turned the aftermath into another ad-supported video.

Which brings me to the straw that broke the camel’s back. Here’s a hack that’s based on the idea of hurting people. It’s what is (luckily) a crappy robot designed to recognize faces and shine lasers into any eyes it detects. Literally it’s conceived to shoot your eyes out. It’s using a red laser that likely won’t cause eye damage unless you intentionally stare into it without blinking, but that’s not discussed in the video, and someone who doesn’t know better replicating this with a different laser could easily cause irreparable damage to their sight.

Rocket Scientists Use Common Sense and So Should You

I was going to use the heading “This Isn’t Rocket Science”, but you don’t see rocket scientists testing new engine designs by lighting a fuse as they run away giggling in short sleeves and flip-flops. Those brilliantly intelligent people are tucked safely in a bunker at a safe distance with their hands hovering over the emergency kill switch as fire fighting equipment hangs out at arms reach. Rocket scientists know a lot about safety and so should you.

This is simple. We don’t have to invent anything to add safety to our hacks. Use common sense. Dress appropriately for your demo — as the situation dictates use reasonable fire-resistant clothing, helmet, etc. Wear protective glasses, laser spec’d goggles, and ear plugs; each whenever called for. Take fumes and particulates seriously and wear respiratory gear. Keep a fire extinguisher around. And if you’re making a video or posting images about it — which you should definitely do — snap a picture or give us a quick video cut to the safety precautions you’ve chosen.

I still want to see awesome projects on YouTube. But I also want to see the trend towards danger for clicks stopped. Let’s do dangerous stuff safely. And let’s be conspicuous about those safety measures. That combination is truly awesome.

Now get off my lawn, and wear your seat belt while doing so.