World Create Day was huge this year. Over 70 different groups on six continents got together on Saturday to work on projects as a global Hackaday community. 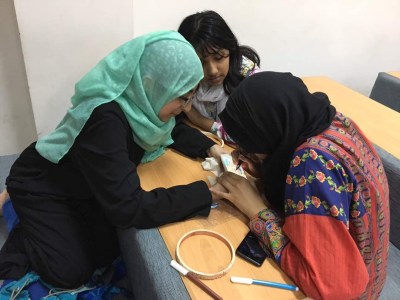 Perhaps the best documented World Create Day so far comes from our friends in Pakistan. LearnOBots hosted a day-long extravaganza of projects on everything from home automation, to wearable computing.

[Haziq] and [Rafay] didn’t just build an IoT lighting project together, they took the time to present their work in this excellent demo video. The build connects Arduino, a Bluetooth module, and a relay to drive the lightbulbs all controlled by an app they built with MIT app inventor to help a friend who is stuck on bed rest.

Browse through the event logs LearnOBots has posted and see a lot more of what went on. This image shows work on wearable interfaces. Fabric markers are used to draw out interesting designs which are then given interactivity using conductive thread and Lilypad boards. We also get a look at a user interface for Summer camp sign-up that was made using Raspberry Pi Zero and a 7″ screen. Other groups were working on custom input projects using Makey Makey and Arduino. The image at the top of this article shows some of the LearnOBots crew with a World Create Day poster, neat! 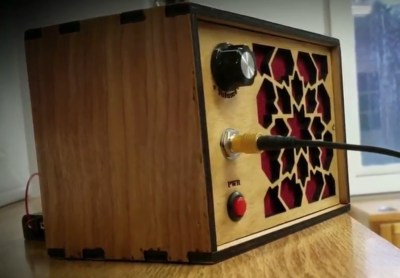 World Create Day at Appalachian Forge Works brought a baby guitar amp to life on World Create Day. The basic circuit is built around an LM386 amp. It was designed using a whiteboard schematic before moving to the breadboard for prototyping.

For some folks that might be enough of a hacking sessions, but the effort didn’t stop there. An enclosure was designed and laser cut from plywood. This included etching labels for the power button and volume knob. There’s even fabric mesh for the speaker grill for a completely finished look that’s a showpiece even when not belting out some Black Keys.

Baltimore Hackerspace Breaks Out the Welder 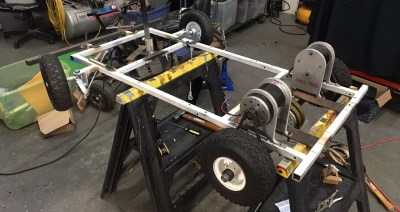 Tiny wheels, big motors, and square tubing — it’s almost ready to hit the test track for some time trials. The gang over at Baltimore Hackerspace spent their World Create Day fabricating what surely will be the next championship entry in the Power Racing Series.

After this picture was snapped the team got to work on the control electronics for the racer, which end up in a transparent box between the motors. The team didn’t have time to install a driver’s seat but that didn’t prevent a late night test run.

Sounds of Sewing and Embedded Tinkering at The Bodgery in Madison

I celebrated World Create Day at The Bodgery in Madison, Wisconsin. There were a surprising variety of projects worked on at the meetup, at least three of them using something new to me:

[Josh Lange] brought along the driver boards he’s been designing. I was delighted to see the batteries used in the project. I didn’t realize you could buy 18650 Lithium cells in a consumer-friendly package (like AA batteries but larger) and there are battery holders to go along with them. I’m used to seeing these pulled out of old laptop batteries.

Hackaday’s own [Bob Baddeley] was on hand, working feverishly at the sewing machine. He’s fabricating an entire line of Wacky Waving Inflatable Arm Flailing Tubemen costumes. They use those springy laundry baskets as the internal skeleton. Also being worked on at The Bodgery was an NES expansion port project that will make a custom cartridge hosting a Raspberry Pi Zero utilize the NES video hardware without altering the stock hardware. We also had a fun time working on embedded basics with a software engineer who is getting up to speed with embedded.

Tell Us About Your World Create Day!

We want to hear about what you did on World Create Day. We’ll be covering more events in the coming days so make sure you add your pictures and stories to your WCD event page. Event organizers get a special treat for making that effort. But mainly we want to show off the excitement and ingenuity that was abuzz around the world this past weekend.

6 thoughts on “Behold The Many Builds Of World Create Day”