You might like foreign-language movies of the late 1960s, or maybe you’re into DC-DC switching step-up power supplies. (Or, like us, both!) None of these categories are likely to sell as well as the newest superhero film or cell phone. The former are examples of niche items that only interest a small fraction of the public, in contrast to blockbusters which have a broader appeal.

Around the turn of the century, there were video rental stores where they had physical stock of VHS cassette tapes on rows and rows of shelves. These stores had to pay rent, and you could pretty easily divide up the rent on a square foot of retail space by the footprint of some VHS cassettes on a shelf, and figure out how much it cost a video rental store per month to keep any given title in stock. One of the last, and largest of these video rental store chains was named, coincidentally “Blockbuster”.

And that’s what they kept in stock: blockbusters. Because the additional cost of stocking any video was the same, Blockbuster didn’t have to think very hard about the choice between filling their shelves with Tobey Maguire as Spider-Man versus a copy of Andrei Rublev, maybe one of the best movies of all time. If the marginal cost of stocking another video, to use the economist’s term for the cost of adding or producing an additional unit, was higher than the amount of money they expected to earn on any given title, it wasn’t on their shelves, even though there were more niche titles than blockbusters.

Then along came Netflix. They stored videos on CDs, without the cases, in warehouses where rent was cheap. The marginal cost of adding another title was pretty close to zero. And all of a sudden, I could rent all of the Tarkovsky movies because Netflix could still make money off me. Now that videos are delivered as data, the marginal cost is very close to zero, and you can watch the strangest things imaginable. Even in very small quantities, when the marginal cost of variety is low enough, it’s worth it for Netflix to cater to everyone.

In case you think this article has totally lost its relevance to Hackaday, feel free to re-read the above paragraphs, but substitute Radio Shack for Blockbuster. How much shelf space were they going to be able to profitably devote to resistors versus cell phones or batteries? Remember how we used to complain about the weak parts selection? That’s how a movie nerd felt walking into Blockbuster. But if Radio Shack was Blockbuster, who is the DIY electronics Netflix? 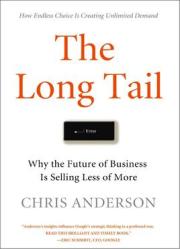 When business types think of the “Long Tail” argument above, most popularly advanced through [Chris Anderson]’s book of the same name, they think about the firms that capitalize on these decreasing marginal costs of variety to snap up extra business. While one title may be rented millions of times, there may also be millions of titles that are only going to be rented a few times. If the cost of carrying a niche title was low enough, there would be millions of dollars to be made by renting out these “long tail” videos when you added them all together.

Amazon and Netflix were the poster children of the mid-2000s. But eBay, Alibaba, Etsy, and Banggood are in the same boat, if not even better exemplars. How much does it cost Etsy to add another supplier of hand-sculpted, breakfast-shaped rings? Nothing, so they add another seller and make more money by brokering more stuff.

We DIYers are huge beneficiaries of all of this long-tail business. In 2002, it would take a week’s work to find a factory in China that was making suitable DC-DC buck converters; now it takes a few mouse clicks. And the result is that an incredible variety of DIY raw materials, and not just blockbusters on the scale of a new cell phone or fitness tracker watch, are now available and make sense for the producers to sell even in quantity one. Which means that we can buy them in quantity one. Thanks eBay, Alibaba, or whatever.

And there are niches within niches. Even the DC-DC converter is a mass-produced item, as is an Arduino — probably the closest thing to a blockbuster in our little world. That doesn’t stop a company like eBay or Tindie (which our overlords, Supply Frame, purchased a couple years ago) from taking advantage of the decreased marginal cost of variety and registering an additional seller, or auctioning their one-off widget. And that means that you can get a breakout board for a magnetic rotation encoder or virtually anything, assembled by the hand of it’s designer.

So sure, it’s mass production that makes the bare rotation encoder IC cheap. But that wouldn’t mean anything to the home hacker if we couldn’t also get our hands on the parts. It’s the decreasing cost of getting access to niche firms, and them gaining access to us, that makes the items available in the first place. And we win from this change, both as the hacker consumer of oddball breakout boards and as the hacker entrepreneur who can start up a small-scale business.

Economies of scale — an additional unit of the same thing costing less to produce than the previous one — are responsible for the low, low price of an ESP8266 module. But the decreasing costs of doing business, of listing an extra item for sale on the Interwebs, is what get us the variety. Looking toward the future, I can’t see the marginal cost of variety doing anything other than continuing to decrease, either. These are glorious times!

40 thoughts on “The Long Tail Of DIY Electronics”