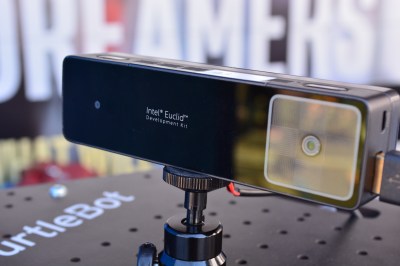 This is the Euclid. Its size and shape reminds me of digital recorders from the 90’s and early 2000’s, but it has a sleek glossy black finish (a bit different from when first teased in August) and it’s bristling with ports, buttons, and a few obvious sets of optics.

This beast is running a quad-core Atom processor with 4 GB of RAM and 32 GB on-board storage. That alone isn’t going to blow you away, but the Euclid also has a RealSense depth camera, an RGB camera, and a fisheye camera built in. It’s capable of stereoscopic vision (VGA resolution) and includes a bevy of sensors crucial for robotics like IMU and GPS. The thing even comes with a Lithium battery. 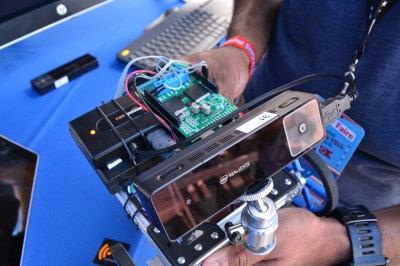 It’s running a full desktop install of Ubuntu which may sound a bit like overkill, but I think the whole point of something like this is for people who don’t want to learn a new platform. Next week we’ll be publishing an article about a group of hackers who were showing off their Autonomous RC Vehicles at the Faire. They have competed in Sparkfun’s AVC and slapped a Macbook Pro onto and RC chassis for the purpose. The Euclid is going to provide much of the same functionality they had for that build at between a fifth and a tenth of the price — all wrapped up in a cozy little case (standard tripod mount for an easy interface). Grab your wireless keyboard and plug into the HDMI to program and debug, or use the built-in WiFi to tunnel in.

In the case of the small wheeled robot you see here, the connectivity to the bot is accomplished through USB. A lower-level embedded board drives the motor controller, with serial commands issued from the Euclid. Some might criticize the latency of using USB, but SBCs controlling robots almost always have similar latency issues.

If you’re more into the bare PCB, the Joule which was announced back in August) is worth a look. It uses an approach now familiar from Intel’s “maker” offerings; Joule itself is a module that needs a host board to break out all of the connections. It is also running an Atom processor with 4GB of RAM and 32 GB of onboard storage. Sounds a lot like the Euclid, right? They’re close, but the two do have different processors.

Electronics cylinder in the ROV

This module delivers the same ability to process computer vision as the Euclid, but you’ll need to bring your own cameras to the party. You could buy the Intel RealSense depth camera the Euclid is packing, but at the Intel booth, it was an underwater ROV that caught my interest.

The team at Rajida sourced a binocular camera board from TaoBao and built their ROV to follow colorful fish around. I got a pretty neat demo using a yellow angelfish toy on a stick. Unfortunately, the Intel booth was outside and sunny California is no place to record video of television playback. Enjoy the still images and trust me that this works and it’s cool.

Enclosure for the ROV

Stereoscopic demo on the TV

Rajida’s builder poses with the robot

Brian Benchoff often writes (ironically – ed.)  about the “selfie drone” being the killer app for portable computer vision. I’m thinking there would be a huge market for underwater ROVs that follow scuba divers and record the experience from a 3rd person perspective.