The key feature for this chip is a boatload of RAM for a framebuffer and a 2D GPU. The PIC32MZ DA family includes packages with 32 MB of integrated DRAM designed to be used as framebuffers. Support for 24-bit color on SXGA (1280 x 1024) panels is included. There’s also a 2D GPU in there with support for sprites, blitting, alpha blending, line drawing, and filling rectangles. No, it can’t play Crysis — just to get that meme out of the way — but it is an excellent platform for GUIs. 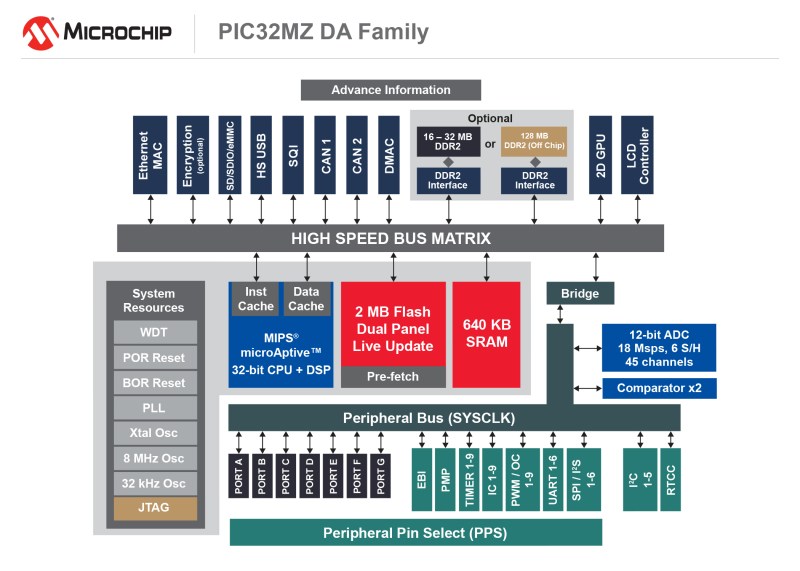 The PIC32MZ DA chips are available in three packages, including a 169-pin BGA, a 288-pin BGA, and a 176-pin LQFP. Program size for these chips is either 1024 KB or 2048 KB and data memory is either 256 KB or 640 KB. The PICs come with an option for an DDR2 controller with an optional “on die” 32 MB of DDR2 SDRAM. This ‘on die’ SDRAM specifically isn’t; instead, we’re looking at something like a package-on-package component. Either way, some of these parts come with 32 MB of DDR2 encapsulated in a blob of epoxy.

Two starter kits for the PIC32MZ DA will be available shortly, one featuring the stacked DRAM, and the other featuring external DRAM. Additionally, a WQVGA touchscreen daughterboard will also be available. This daughterboard is not necessary, though, and Microchip has put a lot of effort into creating new tools to get LCD panels up and running quickly. A new version of the MPLAB IDE features a Display Manager, that allows a developer to generate drivers for any display in minutes.

The volume pricing for the PIC32MZ DA starts at $7.73 in 10k unit quantities.

GPUs are the in thing right now, and between the latest from Nvidia and tiny cheap ARM boards that can push pixels to a 4k display, you could be forgiven to think the only way to add a large, high-resolution display to a product is to include a Linux-based SoC. The PIC32MZ DA is a bridge between these SoCs and traditional microcontrollers, allowing for simpler boards with easier routing that are still able to pump pixels out to a display.

This is a small personal observation, but since the release of the Raspberry Pi and the deluge of cheap ARM boards with HDMI, Hackaday hasn’t seen many microcontrollers used for video applications. There are always people messing around with VGA, but remember that the Uzebox was at one time a very popular product. Part of this is due to the increasing availability of Linux-based boards, but part of it is also due to the tiny amount of RAM microcontrollers are still shipping with. This is a very cool chip, and we can’t wait to see what it will eventually wind up in.