You might think that you do not have what it takes to build a self-driving car, but you’re wrong. The mistake you’ve made is assuming that you’ll be controlling a two-ton death machine. Instead, you can give it a shot without the danger and on a relatively light budget. [Otavio] and [Will] got into self-driving vehicles using radio controlled (RC) cars.

[Otavio] slapped a MacBook Pro on an RC car to do the heavy lifting and called it carputer. The computer reads Hall effect sensor data from the motor to establish distance traveled (this can be used to calculate speed) and watches the stream from a webcam perched on the chassis. These two sources are fed into a neural network using TensorFlow. You train the system by driving the vehicle manually through the course a few times and then let it drive itself.

In the video interview below, you get a look at the car and [Otavio] gives commentary on how the system works as we see playback of a few races, including the Sparkfun 2016 Autonomous Vehicle Competition. I apologize for the poor audio, they lost the booth lottery and were next door to an incredibly noisy robot band (video proof) so we were basically shouting at each other. But I think you’ll agree it’s worth it to get a look at the races. 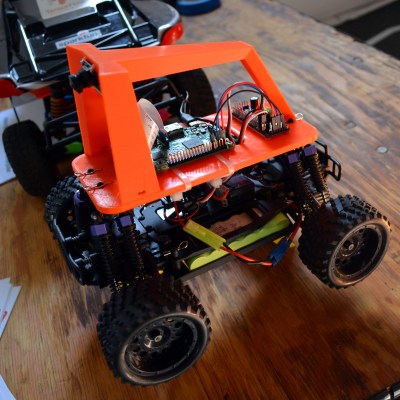 The carputer is certainly a one-off and not the most beginner friendly build to take on. That’s where [Will] comes in. He is on the Donkey Car team. Donkey Car is a standard platform for autonomous vehicles. It’s a combination of about $200 in parts and some 3D-printed chassis pieces that will get you up and running after about two hours of assembly time. The brain of the Donkey is a Raspberry Pi 3, which we already know will run TensorFlow quite nicely.

The guides the Donkey Car team has put together are a really great start. They don’t sell a kit — it’s still a hacker’s project and we love that. If you have any bumps along the way with the build there’s a Slack channel the team hangs out in and would love to help you through your build. The only other issue is finding a track to test your car.

Have you been working on your own autonomous RC builds? We’d love to hear about them on the tips line!

13 thoughts on “Self-Driving RC Cars With TensorFlow; Raspberry Pi Or MacBook Onboard”