Anyone who’s into retro aviation gear falls in love with those mysterious displays, dials, keypads, banks of knife switches. There’s a lot of sexy in those devices, built with high standards in a time when a lot of it was assembled by hand. 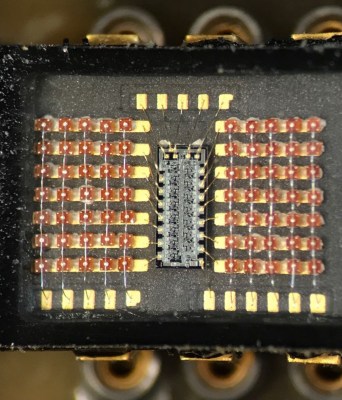 [Jeremy Gilbert] bought a 747-200’s Control Display Unit (CDU)– the interface with the late ’70s in-flight computer–and is bringing it back to life in a Hackaday.io project. His goal is to get it to light up and operate just as if it were installed in a 747.

Of particular interest is the display, which turned out to consist of a series of 5×7 matrices (seen on the right) controlled by chips no one uses any more. However, [Jeremy] found a blog post where someone had hacked out Arduino code for a cousin of the chip, saving him a lot of time. However, he’s got a lot more sleuthing yet to do.

If you’re into retro displays, we’ve mentioned a number of good ones, including the legendary Apollo DSKY and an awesome retrocomputer.