Off the Shelf Options

If you head over to the Unity Asset page and run a search for Arduino, you get a few options. Sadly, searches for Raspberry Pi do not yield any fruit. There are a few generic serial communication options such as Simple Serial and SD Serial, but these options are not free and do not, at face value, appear to be well supported. Unidino looks promising, but it’s thirty bucks and there’s not much activity on the forum. The obvious choice to play around with on a rainy day is ARDunity. There’s a free version that still has plenty of capability to experiment with, and it’s well supported and documented.  It’s written in more of a WYSIWYG style that can be off-putting to coders, but it will have to suffice until someone bangs out more advanced version.

We’re assuming that you already have Arduino and Oculus setup on your PC. If you don’t have an Oculus Rift, we recommend to go to the Oculus site and install the software anyway. It will allow you to test the Unity/Arduino communication through the Oculus run-time even if you don’t have the hardware. This way when you do get a headset, you won’t have to do anything. Just execute the .exe and you’ll see your work in VR. Note that they used to prevent the software from installing on computers that did not meet the minimum requirements. Oculus has since toned down this nuisance, and now allows the software to be installed on most computers, including laptops!

Setting up Unity is straight forward – simply go to the site and download the installer. The latest version at the 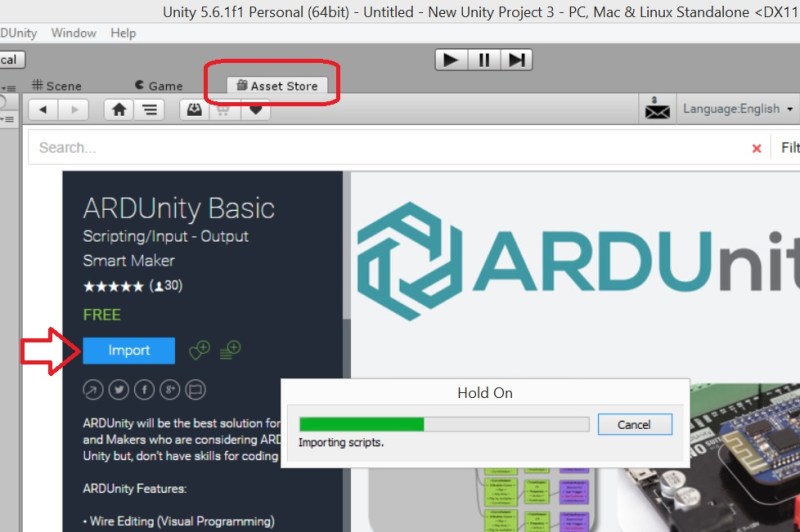 time of this article is 5.6.1. You’ll want to grab the personal version – it’s about five Gigabytes, so give it some time to download. Once installed, head over to the Oculus site and grab the Unity tools import package.

Open Unity and open a new project. Then head back to the Unity Asset store and install the ARDunity Basic Import package.  This will open Unity, and you should see a tab called Asset Store. Click on the tab and then import the package. Then go to Edit–>Project Settings–>Player and set the API compatibility level to .NET 2.0. This will clear the error you see in the bottom of the screen. Then under Other Settings, be sure to select the Virtual Reality Supported option.

Putting It All Together

At this point, everything should be set to get Unity talking to your Arduino through the Oculus Rift. Put an LED on D2 and note your comm port.  From the Project tab (lower left),  expand the folders ARDunity–>Examples–>LED–>Digital. Double click the last example – ReactingTrigger(DigitalLED).unity.

That will load the example. You should now see two cubes in the view window, and a new folder called ARDunity under the hierarchy tab on the top left. Click on ARDunity and you’ll see the inspector tab (far right) change to include a button that says “Export Sketch”. Hit the button and it will export the Arduino sketch to a place of

your choosing. The .ccp and .h files will be generated automatically, along with some other dependencies. I shouldn’t have to tell you to have a look around, but don’t forget to compile and upload it after you’ve had your fill.

Just below the Export Sketch button will be the Comm Serial (Script) window. Search for and select the comm port for you Arduino. After you find your comm port, hit the little play button on top of the main scene window. Once you do this, you’ll see a “Connect” button appear where the Export Sketch was. Go ahead and connect. Now click on the Scene tab above the main viewing window. This will allow you to manipulate the cubes. Go ahead and grab the white cube and run it into the green one. If you did everything right, you’ll see your LED light when the two cubes collide.

The gears in your noggin should be turning right about now… if you can toggle IO from within a game engine; there is some seriously cool stuff you can do! But we’ve only scratched the surface. Let’s get this working in Virtual Reality!

In order to enter the virtual world, you need a couple of things. One is a character controller and the other is something to walk on. Hit the play button again if you haven’t already. This will disconnect everything and allow you to edit the world. Go to Game Object–>3D Object–>Plane and adjust the plane so the two cubes are hovering above it. Then un-collapse the ARDuino and expand the OVR folder to OVR–>Prefabs. Select the OVRPlayerController.prefab and drag it into the main hierarchy in the upper left. You’ll see the player controller appear in the main scene window. Drag it away from the cubes, and then under the inspector tab on the right hand side, de-select the Use Profile Data option in the OVR Player Controller (Script) section.

Now, select ARDuino under the hierarchy tab, press play and then connect. If you have an Oculus Rift connected, you should be able to put it on and run into the green cube and light the LED on the Arduino. If you don’t have one, just use the arrow keys to do the same.

So where can you go with this? The biggest thing that jumps out to us is haptic feedback. Imagine instead of a cube, you have a wall or table or something of that nature. Have the Arduino trigger some type of feedback when you touch or bump into the object.

Dig into the code and let us know of any bugs or improvements. Be sure to follow some other examples as well, and check out the video below for a demonstration. If you’ve done anything cool with Unity, show us in the comments.