Back in around 2002, we first started hearing about a new technology called SawStop that made table saws safer. Table saws are one of the most dangerous tools in the woodworking shop, so anything that makes them safer to work around is a welcome innovation. Most Hackaday readers probably already know how SawStop works – the blade is used as a giant capacitive sensor. If the capacitive touch sensor detects anything, an aluminum brake is fired into the saw blade. This stops the blade and drops the motor and blade assembly below the table surface. There is no question that the SawStop system works, and has saved people from grievous injury to their hands, fingers, and other body parts.

The controversy centers around Dr. Stephen Gass, who invented the system. Gass isn’t a carpenter by trade. He has a doctorate in physics and worked as a patent attorney. Woodworking was a hobby, as it is for many of us here at Hackaday. Dr. Gass doesn’t want to be in the tool industry. He came up with an idea, patented it, and wanted to license the technology to the tool industry. SawStop began selling tools because the tool industry wasn’t onboard with Gass’s ideas.

The SawStop story has been told as an analogy of David and Goliath. Goliath being the power tool industry and their lawyers. The story goes back to a 2001 presentation to the Defense Research Industry, a trade group for lawyers who handle product liability and similar defense cases.

Gass presented SawStop, including the now famous hot dog demonstration. The next speaker was Dan Lanier, a lawyer for Black and Decker. Lanier presented a hypothetical lawsuit involving SawStop. In Gass’s view, the crux of the presentation was that if the industry adopted SawStop any saw sold without the technology could be viewed as defective, and any injury caused by such a saw subject to a lawsuit.

In the end, no tool company ever licensed the technology. Ryobi came close to signing an agreement back in 2002. The agreement said that Ryobi would pay SawStop 3% of the wholesale price of each saw sold with the SawStop system. If and when the power tool industry adopted SawStop, the royalty would increase to 8%. Ryobi kept stalling, and the agreement was never signed. Ryobi is now losing personal injury lawsuits based on not signing that agreement.

Gass and his partners believed in the technology, so they left their attorney jobs, got in touch with a tool manufacturer in Taiwan, and started building table saws themselves. They also began lobbying the US government to make safety systems standard on all saws.

Fast forward a few years, and now we have other players entering the saw safety game. There is the Whirlwind system, which activates when the user touches the blade guard, rather than the blade itself. Whirlwind is notable because it stops the blade without damage to the saw or the blade. The user can continue cutting after a change of underwear. Whirlwind appears to be another small startup company. It seems they are concentrating more on aftermarket modifications to existing saws. 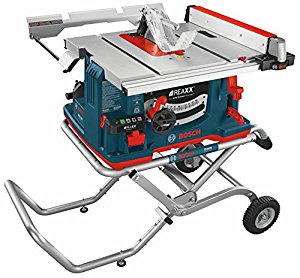 Bosch also entered the arena with Reaxx. Reaxx uses a similar sensing system to SawStop but doesn’t stop the saw blade at all. An explosive gas generator called an activation cartridge is discharged. These cartridges are similar to the chemical charges used in airbags. Rather than inflating a bag, the activation cartridges throw a piston out. The piston pushes the entire blade and motor assembly down below the table. The blade isn’t damaged, there is no brake to replace. The only consumable is the piston cartridge.

SawStop sued Bosch for patent infringement. After several court battles, here is how things stand. Bosch was found to infringe on SawStop patents 7,895,927 and 8,011,279. The International Trade Commission ruled to ban the import of Reaxx saws and equipment. Bosch has said they will appeal the decision. While the saws can’t be imported, you can still buy them from Amazon. This most likely is distributor stock. For people who already bought the saw, this means they won’t be able to buy the activation cartridges. So the safer saw they paid extra for is now an ordinary table saw. For now, Bosch is getting around this import issue by producing the activation cartridges here in the USA.

The closest parallel we can find to a story like this is that of the seat belt. The three-point belt was invented by Nils Bohlin while he worked for Volvo. The difference is that Volvo recognized how important belts were and ensured the technology would be free for any automaker.

So what do you think? Is the SawStop the story of an inventor who is just trying to make the world safer? An egomaniac who wants to control the tool world and force everyone to use (and pay for) his system? Or something in between? Let us know in the comments.