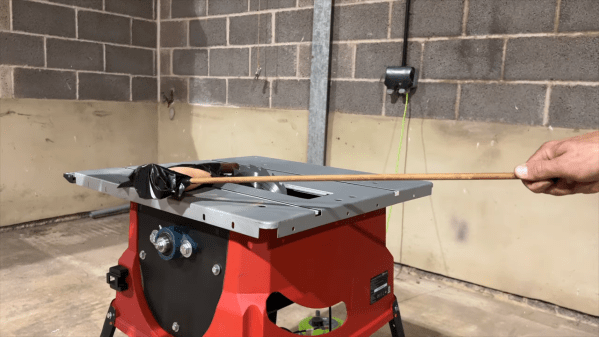 TL;DR — when [Colin Furze] is your “safety inspector,” you really should be reconsidering your project goals.

Most of us have probably by now seen the SawStop brand of self-stopping table saw, which detects when something meatier than wood has the bad taste to touch the spinning blade, more or less instantly stopping it and preventing sudden traumatic amputations. It’s an outstanding idea, and we’d love to see the technology built into all table saws. But alas, SawStop saws are priced out of reach for many woodworkers, which left [Ruth Amos] to roll her own DIY version of the system.

It should be stated right off the bat that none of what [Ruth] does here is a good idea, and that everything shown is really just a proof of concept. The basis for her build was a somewhat flimsy-looking contractor-style saw, to which [Ruth] attached an Arduino set up to detect when something conductive touches the blade. She shares no particulars on the sensing method, but our guess is capacitive coupling. She then sets about experimenting with a series of above-table gizmos to arrest the blade, with limited success, plus all the attachments would make the saw essentially useless. But working above the table does make sense in the prototyping phase, and allowed her to figure out what wouldn’t work.

In the end, it was an electromagnetic clutch from an electric lawnmower that seemed to do the trick, albeit at the expense of heavy mods to the saw and a considerable increase in the system’s angular momentum. Nonetheless, the blade stops pretty close to instantly in the old hot dog test. It doesn’t drop the blade below the table, of course, and the hot dog is a little worse for the wear, but it’s still pretty impressive.

We’ve discussed SawStop’s technology before and why it isn’t perhaps as widely available as it should be, if you’re curious.

END_OF_DOCUMENT_TOKEN_TO_BE_REPLACED

In every workshop ever, there’s a power tool that goes unnoticed. It’s the bench grinder. It’s useful when you need it, and completely invisible when you don’t. We take the bench grinder for granted, in part because we keep it over there with that box of oily rags, and partly because it’s so unassuming.

But you can really mess your hands up on a bench grinder. Words like ‘degloving’ are thrown around, and that doesn’t involve actual gloves. For his Hackaday Prize entry, [Scott] is adding safety to the ubiquitous bench grinder. It’s called the Grinder Minder, and it aims to make the humble bench grinder a lot safer.

There are a few goals to the Grinder Minder, most importantly is DC injection braking. This stops the grinder from spinning, and if you’ve ever turned off a bench grinder and waited for it to spin down, you know there’s either a lot of energy in a grinder wheel. Grinder Minder also adds accidental restart protection and an actual ANSI-compliant emergency stop. All of this is designed so that’s it’s a direct drop-in electronics package for a standard off-the-shelf grinder.

The early prototypes for the Grinder Minder have the requisite MOSFETs and gigantic wire-wound resistors , but the team has recently hit an impasse. The current market research tells them the best way forward is designing a product for bigger, more powerful tools that use three-phase power. The team is currently researching what this means for their project, and we’re looking forward to seeing where that research lands them. 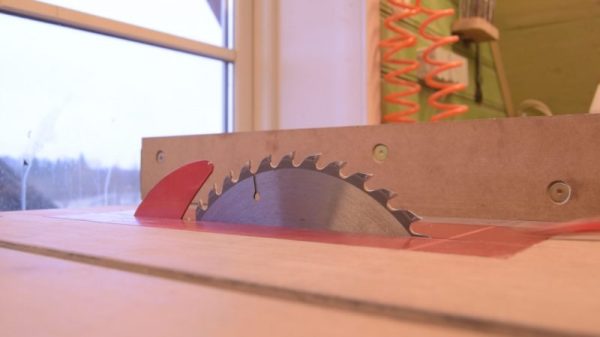 What in the world is a riving knife? Just the one thing that might save you from a very bad day in the shop. But if your table saw doesn’t come with one, fret not — with a little wherewithal you can add a riving knife to almost any table saw.

For those who have never experienced kickback on a table saw, we can assure you that at a minimum it will set your heart pounding. At the worst, it will suck your hand into the spinning blade and send your fingers flying, or perhaps embed a piece of wood in your chest or forehead. Riving knives mitigate such catastrophes by preventing the stock from touching the blade as it rotates up out of the table. Contractor table saws like [Craft Andu]’s little Makita are often stripped of such niceties, so he set about adding one. The essential features of a proper riving knife are being the same width as the blade, wrapping closely around it, raising and lowering with the blade, and not extending past the top of the blade. [Craft Andu] hit all those points with his DIY knife, and the result is extra safety with no inconvenience.

It only takes a few milliseconds to suffer a life-altering injury, so be safe out there. Even if you’re building your own table saw, you owe it to yourself.

END_OF_DOCUMENT_TOKEN_TO_BE_REPLACED 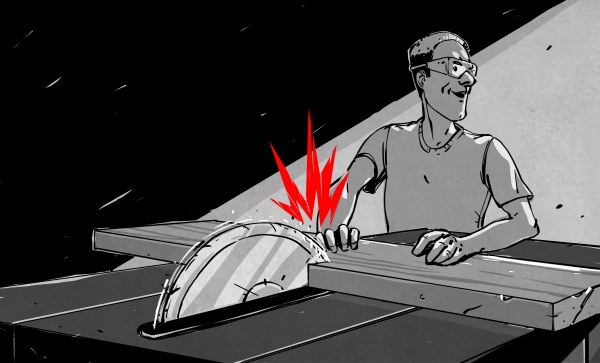 END_OF_DOCUMENT_TOKEN_TO_BE_REPLACED

Miter saws are great tools for cutting pieces of wood at a variety of angles. If you have ever cut a really long piece on a miter saw there is no doubt you’ve either propped up the extended end on a pile of scrap wood or asked someone to hold the dangling piece so you could get an accurate cut. Doing either is a little hokey and is a general pain in the butt.

[Kram242] started a project that could eliminate these problems and also provides a solution to consistent length cuts of multiple pieces. It’s an adjustable stop that is sure to make miter saw cuts much less annoying.

The rig is extremely simple and consists of a piece of aluminum extrusion, v-wheel carriage and lever-actuated clamp. The movable carriage lets the operator quickly position the stop to ensure the wood is cut at the appropriate location. This stop also makes it easy to cut several pieces of wood to the exact same length.

If we had to make any suggestions for improvements it would be to add supports to the carriage that emulate the saw bed and backstop as well as an adhesive measuring tape guide. 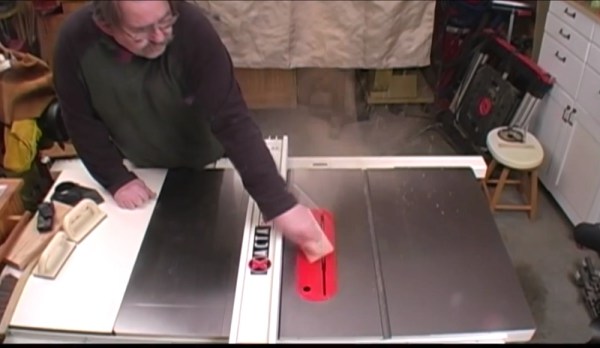 Our comments section has been pretty busy lately with talk of table saws and safety, so we decided to feature this sobering video about table saw kickback. [Tom] is a popular YouTube woodworker. He decided to do a safety video by demonstrating table saw kickback. If you haven’t guessed, [Tom] is an idiot – and he’ll tell you that himself before the video is over. There are two hacks here. One is [Tom’s] careful analysis and preparation for demonstrating kickback (which should be fail of the week fodder). The other “hack” here is the one that came breathtakingly close to happening – [Tom’s] fingers.

Kickback is one of the most common table saw accidents. The type of kickback [Tom] was attempting to demonstrate is when a board turns and catches the blade past the axle. On a table saw kickback is extremely dangerous for two reasons. First, the piece of wood being cut becomes a missile launched right back at the saw operator. We’ve seen internal injuries caused by people being hit by pieces of wood like this. Second, the saw operator’s hand, which had just been pushing the wood, is now free to slid right into the blade. This is where a SawStop style system, while expensive, can save the day.

The average 10 inch table saw blade has an edge traveling at around 103 mph, or 166 kmh. As [Tom] demonstrates in his video, it’s just not possible for a person to react fast enough to avoid injury. Please, both personal users and hackerspaces, understand general safety with all the tools you’re using, and use proper safety equipment. As for [Tom], he’s learned his lesson, and is now using a SawStop Table.