[Jarrett] has a box of Nokia phone batteries and decided to use them in a project. He designed and built WiFi throwies— these consist of ESP8266 WiFi chips attached to custom PCBs and powered by Nokia phone batteries. The board charges LiPoly/Li-Ion batteries over USB with the help of a MCP73831 charger chip and has USB-serial on-board. It’s much more of a powered ESP8266 dev board than a throwie, but we’ll give [Jarrett] the benefit of the doubt. 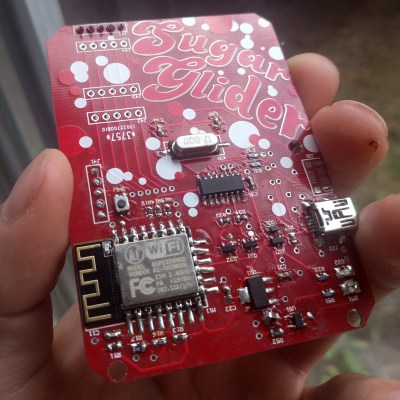 The PCB ended up larger than [Jarrett] would have liked, because of the size requirements of the phone battery connected to it. However, this gave him the canvas to create some fun PCB art. After designing the board he imported the Gerbers into Adobe Photoshop and converted each layer into a monocolor image based on the material of that layer—purple for OSHPark’s stencil mask, beige for DirtyPCB’s FR4, and so on. One challenge [Jarrett] encountered was how to get the art back into Altium Circuit Maker, his layout program of choice. After playing around with different methods for a few days, he wrote a tutorial sharing what he found out.

HaD has covered WiFi throwies before. We also appreciate a beautiful circuit board. Check out our posts on turning PCBs into art and making lapel pins out of circuit board fiberglass.